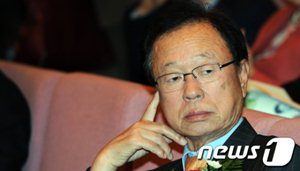 The countdown for a floor vote to ratify the long-delayed free trade deal between Korea and the United States began yesterday as the ruling Grand National Party discussed the timing and strategy over how to use its majority in the National Assembly.

Stressing that a floor vote is a legitimate action in the legislature, the Grand Nationals held a leadership meeting yesterday to decide their next moves - and how to fend off violent opposition from anti-FTA representatives.

A plenary session is scheduled for Thursday, and the bill to ratify the Korea-U.S. Free Trade Agreement has been pending at the Foreign Affairs, Trade and Unification Committee for weeks.

“After the lawmakers’ caucus [on Thursday], the party adopted an official position that the FTA should be ratified as soon as possible, so I will do my best to realize it,” Representative Hwang Woo-yea, floor leader of the GNP, said at the party’s leadership meeting yesterday.

To discuss their next course of actions, 148 out of the 169 GNP lawmakers gathered Thursday and decided that the ruling party will speedily process the FTA ratification bill. They also agreed that the party leadership will be given the authority to decide the next steps, while promising to stay out of violent melees with opposition lawmakers.

Patience also appeared to be running out among GNP lawmakers who had pursued a compromise with the opposition in order to avoid violent confrontations over the FTA.

“Many of the conciliators said they will participate in the floor vote to state their opinions if the voting takes place according to the National Assembly Act,” Representative Lee Doo-ah, spokeswoman of the GNP, told the PBS radio yesterday.

Representative Hwang Young-cheul, another spokesman of the GNP, told SBS radio, “The party will formally ask National Assembly Speaker Park Hee-tae to directly introduce the bill to ratify the FTA for a floor vote when the necessary time comes.”

Park admitted yesterday that he is facing a predicament in the continued deadlock between the GNP and the DP, hinting that he has no other option than arrange a floor vote. “There is no more ways or means for me to mediate,” Park told reporters yesterday. “I have used up all my arrows.”

Park said he will wait for the GNP’s final request and decide his next move.

“Even if I have to introduce the bill directly or the ruling party uses its majority against the opposition’s protest, the people will understand the National Assembly speaker’s efforts to mediate the two sides.”

As the ruling party began preparations to railroad the FTA through, the Democrats reiterated their position that they will block its passage at all costs. The DP leadership said it will decide its next move at a lawmakers’ caucus on Monday.

Representative Lee Yong-sup, DP spokesman, said yesterday that the DP has no choice but to try to stop the GNP physically because “we cannot allow the GNP lawmakers to decide Korea’s future with their unjust logic of majority.”

Representative Kim Jin-pyo, the floor leader of the largest opposition party, told reporters yesterday that he proposed to the GNP to handle other pending issues while delaying the FTA vote.