Korean President Lee Myung-bak and leaders of Southeast Asian nations pledged at an annual cooperation summit yesterday to work closely together to further boost the already brisk trade between the two sides.

The meeting was the first in a series of regional summits Lee planned to attend this week on the Indonesian resort island of Bali to increase cooperation with the 10-member Association of Southeast Asian Nations, a region that officials say is rich in natural resources and has growth potential.

Asean is Korea’s second-largest trade partner after China, and the second-largest investment destination after the European Union. The region is also an important source of energy and other resources for Korea and sits on key maritime routes that the country uses to bring in foreign resources.

At the summit, Lee announced that Seoul will establish a new diplomatic mission in Jakarta in the first half of next year that will exclusively handle cooperation with Asean, the presidential office said in a statement. 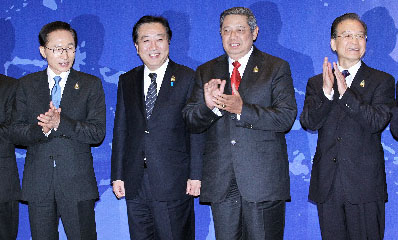 Asean leaders welcomed the decision and hope the mission will contribute to moving relations between the two sides forward, the statement said.

The leaders also welcomed forecasts that trade between the two sides is expected to reach a record high this year thanks to the 2007 free trade agreement between them, the statement said. Korea and Asean have already laid out a goal to expand bilateral trade to $150 billion by 2015, and in Friday’s summit, they agreed to make efforts to reach the goal earlier than scheduled, the statement said.

On the sidelines of the summit, the two sides signed a revision to the goods agreement in their FTA to make it easier to speed up agreed-upon tariff cuts and trim the list of sensitive items subject to safeguard measures.

Leaders welcomed the revision and agreed to deepen cooperation to carry out the FTA, it said.

In that regard, the two sides applauded the first cooperation talks held in Seoul in October among the foreign ministers from Korea and five Mekong River nations - Cambodia, Laos, Myanmar, Vietnam and Thailand - expressing hope that the forum will help narrow the development divide among Asean nations.