Park gets thanks for half-price tuition promise

Park gets thanks for half-price tuition promise 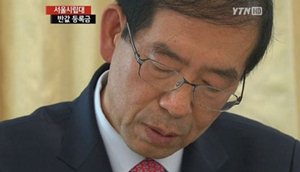 Seoul Mayor Park Won-soon chatted with students from the University of Seoul about his plan to cut their tuition in half.

But he refused to be pinned down by reporters on remarks earlier this week that he was in favor of free education for Korean college students.

Park visited the university on Thursday afternoon to attend a discussion with students on his promise to cut their tuition in half, which is part of his plan to increase welfare benefits in Seoul.

On Nov. 4, Park said he would cut tuition at the city-run university. At the time, he said he hoped that would set “an example that spreads to other local governments nationwide.”

To thank the mayor, the student council chairman promised that all the students at the university would become vigorously involved in volunteer programs run by the city government for residents of Seoul.

Delighted by the students’ promise, the mayor said, “Although the plan to cut tuition in half hasn’t been passed in the city council yet, I am pleased to see students promising to show their dedication to the city.

“I believe contributing to society is one of the virtues that a leader should have,” he said.

However, the mayor asked the university to focus on underprivileged students first.

“I think the University of Seoul should provide the benefits of reduced tuition to people in need by first selecting students who graduated from vocational high schools or children from low-income families,” Park said.

Park made headlines Tuesday with controversial remarks during a lecture at Dongguk University, Seoul, in which he expressed a wish for free college for Korean students.

“You guys have had a tough time fighting for reduced tuition,” Park said.

“Why don’t you fight to abolish tuition? Look at Germany, Sweden, and Finland. Do students attending universities there pay tuition?”

Reporters gave Park a barrage of questions, asking if he is officially planning to advocate for free college tuition. Park hedged.

“I don’t want reporters to slice my words down the middle and take them out of context,” he said.

Asked if he supported the idea of free tuition, the mayor said, “If it were possible, it would be great.”