Suwon advances as Ulsan shocks Seoul in round 1

Suwon advances as Ulsan shocks Seoul in round 1 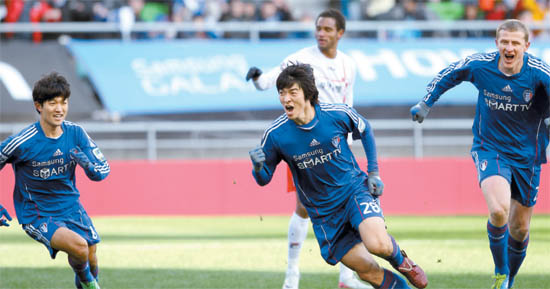 At Suwon World Cup Stadium, Ha, 24, scored the opening goal in the extra time of the first half. Suwon winger Yeom Ki-hun, who is the league’s second best in assists with 13, delivered a free kick from the left flank, and Ha was able to put the ball into the right corner of the net, passing Busan goalkeeper Jeon Sang-wook. It was Ha’s first goal since July 23, when he also scored against Busan.

“I knew the ball would be coming to me,” Ha said after the match. “I’m just thankful for Ki-hun.”

Suwon, who finished fourth in the regular season, had never bested Busan this season, losing all three encounters. 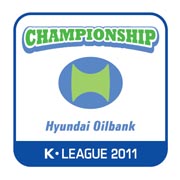 And without Macedonian striker Stevica Ristic, who was suspended for a brawl that occurred during the Asian Football Confederation Champions League semifinal against Al Sadd last month, it was expected to be a tough match, but one goal was enough for the hosts.

“It was a tough match for both fans and players in this cold weather,” Suwon coach Yoon Sung-hyo said. “But we showed better concentration throughout the game.”

Suwon will now face Ulsan Hyundai FC, who beat FC Seoul 3-1 in another first-round playoff game over the weekend.

Ulsan, which grabbed the last spot for the playoffs by finishing sixth in the regular season, was superior against the defending champion Seoul on Saturday at the Seoul World Cup Stadium.

Ulsan defender Kwak Tae-hwi first opened the scoring in the 17th minute, and striker Kim Shin-wook added another goal for the visitors in the 33rd.

Seoul’s Montenegrin striker Dejan Damjanovic, the top scorer in the K-League during the regular season with 23 goals, was able to cut the two-goal deficit to one in the 58th with his header. But Ulsan midfielder Ko Seul-ki gave the final blow just a minute later with his diving header, bringing the score to 3-1.

Suwon and Ulsan will square off on Wednesday at Suwon World Cup Stadium before the winner plays against regular season runner-up Pohang Steelers FC on Saturday. The winner of that match will advance to the home-and-away championship series to face regular season champion Jeonbuk Hyundai Motors FC.