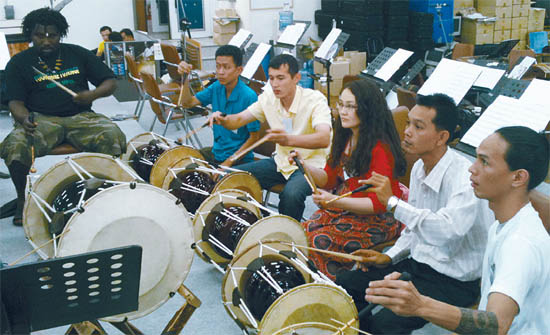 Musicians from eight countries, including Malaysia, Vietnam, Uzbekistan and Kenya, practice for the upcoming concert “My Song, Arirang,” which runs Thursday and Friday at the National Theater of Korea in central Seoul. Provided by the theater


Nineteen musicians from eight countries who have been studying traditional music as part of a cultural exchange program hosted by the National Theater of Korea will show their talents at a concert this weekend.

The musicians are part of the Cultural Companions program, through which people in the fields of culture, the arts, tourism and athletics from countries in Asia, Africa and the Middle East are invited to Korea to share their talents.

At the concert, “My Song, Arirang,” which takes place Nov. 24 and 25 at the National Theater’s small hall Dal in central Seoul, the 19 musicians will play music from their respective countries as well as traditional music from Korea. They will also play songs from Korean dramas and newly composed music. They will be accompanied by the National Orchestra of Korea.

The 19 musicians invited by the National Theater hail from eight countries: Malaysia, Mongolia, Myanmar, Vietnam, Uzbekistan, Kenya, Thailand and the Philippines. They landed in Korea in June.

After their arrival in Korea, the musicians’ talents were showcased at “Cross World,” a traditional world music concert.

The upcoming “My Song, Arirang” concert will be divided into two parts.

The first part will highlight music from the visiting artists’ countries. The artists will perform music from each other’s countries.

In the second part of the concert, the musicians will play traditional Korean instruments, which they have been studying for the past six months since their arrival.

“Milyang Arirang” is a famous Korean folk song with origins in South Gyeongsang. The composer is known to be from Milyang and he wrote the song 50 to 60 years ago. The speed of the song is relatively fast, with brisk and rhythmical features.

“Doraji Taryeong” is a slow melody loved by the people of Hwanghae Province in North Korea. It is now one of the most famous Korean folk songs, along with Arirang. The song has a total of eight verses with a chorus after each.

“Yeongnam Samulnori” is a rhythmic song for a samulnori percussion quartet that is often performed in the Gyeongsang provinces. It is strong and vivacious, and the song builds tension as the verse repeats. In one of the verses, the singers wish the listener good luck. This part will be sung by the 19 musicians in their own languages.

For the finale, the 19 musicians will be joined on stage by the 30 members of the National Orchestra of Korea to send a message of harmony and cooperation.

*“My Song, Arirang” will run from Thursday to Friday at the National Theater of Korea’s small hall Dal. Performances start at 7:30 p.m. Admission is free. Go to Dongguk University Station, line No. 3, exit 2, then take the shuttle in front of Taegeukdang. For more information, call (02) 2280-4019 or visit www.ntok.go.kr.