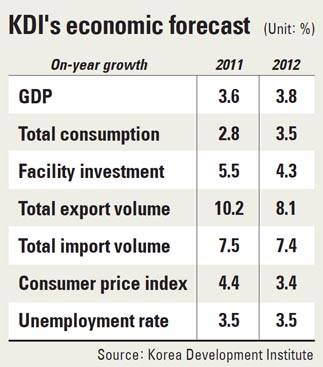 The Korea Development Institute has lowered the country’s growth forecast for this year to the lowest among local think tanks, citing uncertainties in the global market, the state-run institution said yesterday.

The think tank predicted Korea’s economy will grow 3.6 percent this year, down from the 4.2 percent it predicted in May.

“Recently, our economic growth seems to be slowing slightly, affected by deteriorating external conditions,” said Hyun Oh-seok, president of KDI. “Domestic demand has not significantly contracted, but export growth has been steadily slowing.”

The KDI also forecasted that the economy will grow 3.8 percent next year, a drop from its earlier forecast of 4.3 percent growth.

The global economic situation is gloomy due to the debt crisis stemming from the European Union and slower than expected economic growth in the United States. Demand for Korean-made products has dropped significantly this year from major developed countries, posing a challenge to local companies to reach their targets for this year and next.

The KDI forecast that the country’s exports will grow 10 percent next year, slowing from this year’s on-year growth of 19.7 percent. Imports were expected to rise 10.8 percent, down from 24.7 percent expected for this year.

The economy is forecast to post a current account surplus of $15.1 billion next year, compared with the $21.3 billion forecast for this year, according to the report.

The KDI, however, forecast that Korea’s economic growth may pick up steam in the second half of next year as market uncertainties might ease.

The report said the gross domestic product is expected to grow 3.2 percent on-year in the first half before expanding 4.2 percent in the second. The prediction was based on the assumption that crude oil import prices will average around $100 per barrel next year, which is slightly down from $105 for this year. It expected the local currency will appreciate about 4 percent against the U.S. dollar.

Private consumption in the country is expected to get stronger next year amid an improving employment situation.

The KDI forecast private consumption will grow 3.1 percent next year, up from this year’s 2.6 percent gain. The jobless rate is expected to stay at an annual average of 3.5 percent, with about 300,000 jobs added to the economy. Consumer prices will increase 3.4 percent next year, which is down from a 4.4 percent gain forecast for this year, as prices of oil and other commodities are expected to stabilize, the report said.

The institute recommended the government maintain its current fiscal policy unless the economic situation sharply deteriorates, and underscored the importance of monetary policy management to stabilize mid and long-term inflation. The Bank of Korea left the benchmark borrowing rate at 3.25 percent for the fifth straight month earlier this month amid the worsening euro zone debt crisis and easing inflation. BOK Governor Kim Choong-soo told reporters that the negative risks to growth remain high due to external factors, including Europe’s sovereign debt crisis and global financial market jitters.

Korea’s consumer prices dropped below the government’s target of 4 percent last month for the first time in 10 months as prices of agricultural goods stabilized.

Inflation concerns still remain, however, as the index for this month and next month is likely to surge as prices of raw materials and oil prices remain high. Statistics Korea will announce November’s Consumer Price Index on Dec. 1.

“We believe it is not the right time to tighten monetary policy, but given rising household debt and inflation worries, more of the current expansionary stance could worsen the side effects of low interest rates,” the KDI noted.