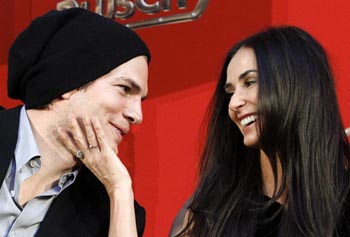 Actress Demi Moore announced “with great sadness” Thursday the end of her high-profile marriage to Ashton Kutcher, after his reported infidelity with a woman less than half her age.

The confirmation comes after months of media reports about problems between the Hollywood power couple, who married in 2005 when she was 42 and he was 27.

She had earlier been married to actor Bruce Willis for 13 years.

“It is with great sadness and a heavy heart that I have decided to end my six-year marriage to Ashton,” the 49-year-old said in a statement issued through her publicist.

“As a woman, a mother and a wife there are certain values and vows that I hold sacred, and it is in this spirit that I have chosen to move forward with my life.”

Thirty-three-year-old Kutcher, who recently took over from troubled star Charlie Sheen in the hit TV series “Two and a Half Men,” tweeted a poignant message minutes after Moore’s announcement.

“I will forever cherish the time I spent with Demi. Marriage is one of the most difficult things in the world and unfortunately sometimes they fail. Love and Light, AK,” he wrote.

As well as being a famous acting couple, Moore and Kutcher have both been pioneers of the use of social media, notably Twitter.