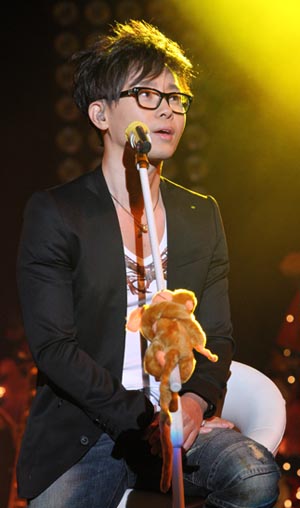 After touring small theaters this summer, Lee Seung-hwan says he has the confidence to get back on his feet. He plays at the Olympic Gymnastics Arena in Seoul Dec. 23-25. Provided by Dream Factory

With an estimated 10 million records and more than 1,000 concerts, including three at the Olympic Gymnastics Arena in southeastern Seoul next month, singer Lee Seung-hwan, appears to have established himself as a success. His recent stint as a judge on the second season of MBC’s “Star Audition: The Great Birth” would also seem to solidify his position as the Little Prince, which is how he is known amongst his fans.

Yet in a recent interview at Dream Factory, the entertainment management agency he founded in Seongnae-dong, southeastern Seoul, Lee continued to reiterate that his career is on the decline.

“I’ve been walking downhill for the last 10 years,” Lee said. “Album sales have decreased and the size of the concert venues I play is shrinking. At first, I was apprehensive about it, but a few years ago I let go of my anxiety and am finally at ease.”

He had started the interview by saying “Do not exaggerate or overestimate me,” which could probably be interpreted in two ways: He is already famous so it is unnecessary to embellish further or he is no longer a star so it would be best to reveal his true nature.

No matter which it is, it will still be difficult for fans to see Lee as a fading star. For people in their 30s and 40s who know Lee as a hit maker and who spent their youth with Lee’s songs, it will be especially hard to agree with his idea of himself.

Born on Dec. 13, 1965, the singer, songwriter and producer rose to stardom with his debut song “My Empty Heart,” and had similar success with songs such as “Lovesickness,” “Dunk Shot” and “For a Thousand Days.”

“That’s all ancient history now,” Lee said. “Last year, I released my 10th album, but not many people know about it. I’ve been producing my own albums since my debut, and I hold the rights to more than 20 records. But then one month I only earned 70,000 won [$62] from record sales. What was I to do? All that’s left for me to do is try my best.”

One could speculate that the decline of the music industry had something to do with the decline in Lee’s popularity, though he believes there are other reasons.

“That could be one aspect, but I may also have isolated myself,” Lee said. “As I insisted on creating only the music I wanted to hear, it was only the people who were longtime fans of my music who were able to enjoy it.”

To avoid compromising his distinct musical style yet still earn enough to finance his concerts and albums, Lee started performing at small business events. It was an unexpected turn for someone revered by his fans as the “god of performance,” though perhaps not as surprising as the reactions he has received at some of those events.

“A popular young singer once performed before me, and when it was my turn to perform, people started walking out,” Lee chuckled. “I was so embarrassed.”

Not to be discouraged, Lee hit the road to reconnect with fans.

“Last year’s year-end concert fell short of my expectations. Disappointed by the outcome, I was thinking of staying home with my dogs,” he said. “The turning point for me was the tour around small theaters this summer. Interacting with the audience and feeling their energy gave me the strength to get back on my feet.”

Now, he’s channeled the confidence he gained from the tour into a three-concert gig for the Christmas holiday, Dec. 23 to 25. And he’s determined to see it succeed.

As someone who prides himself as having the best sound and quality concerts, Lee said music is a lifeline.