It’s all stars and stripes at the Presidents Cup

It’s all stars and stripes at the Presidents Cup 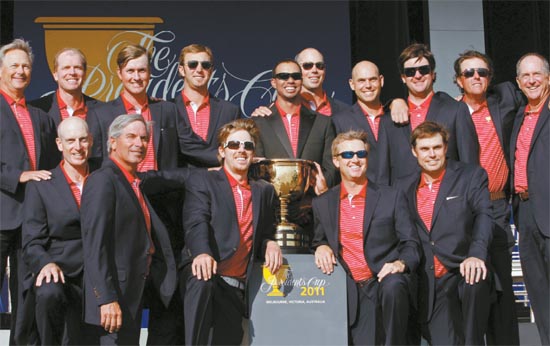 
MELBOURNE, Australia - The Americans returned Down Under and this time wound up on top in the Presidents Cup.

Jim Furyk became the fourth player to win all five of his matches, and the bottom half of the lineup was strong enough Sunday to give the Americans their fourth straight win over the Internationals in this lopsided series.

Perhaps it was only fitting that Tiger Woods clinched the cup for the second straight time.

U.S. captain Fred Couples was criticized for using a pick on Woods, who had been out with an injury most of the season and had not won since his personal life crumbled two years ago. Woods played well all week, even if he didn’t always get rewarded with a point. In his singles match against Aaron Baddeley, he was never seriously challenged.

Woods closed out Baddeley, 4 and 3, and the celebration was on. The only matchup left was for Steve Stricker in the anchor to beat Y.E. Yang for the final score, 19-15.

“I was hoping it wasn’t going to come down to us,’’ Woods said. “I was hoping that Stricks and I could take a victory lap back here. But we didn’t get off to a good start early. I was telling Joey [LaCava, his caddie] on the range, ‘It’s probably going to come down to the last four matches.’ We needed to get our point, so we went out there and played really well today and put a lot of heat on Badds.’’

Couples said Woods was ready to go all week at Royal Melbourne.

“He was ready for a month,’’ Couples said. “Certainly, I couldn’t answer how he was going to play, but this week I think he showed to himself that his swing is back and he’s healthy, and that’s more important to me. Obviously, we want to win the cup, but it’s more important for me to have people realize that he can play the game.’’

He can celebrate, too.

Woods took his turn in joining the Fanatics, the Aussie mostly male cheerleading group that goes to big sporting events. Woods even donned one of their green caps and slapped hands in the crowd.

It was a small measure of revenge for the Americans, whose only loss came at Royal Melbourne in 1998. And it was vindication for Couples, who said a month earlier that he was taking Woods because he was the “best player forever.’’

International captain Greg Norman got in on the debate, saying he would have taken PGA champion Keegan Bradley over Woods.

“He stepped up to the plate. He putted extremely well,’’ Norman said. “Any player hates to see another great player struggle because we all know what it’s like to go through the ins and outs of the game.

At the end of the day, you want to see the player who has dominated the game come back.’’

As for Couples’ taking Woods over Bradley?

“I did make those comments,’’ Norman said. “I probably still would have gone for Keegan Bradley because he’s a major champion.’’

The International team’s only win came 13 years ago at Royal Melbourne, when the Americans suffered their biggest loss in any team competition. There was no repeat this time, not even close.

The Americans led after each session, and their 13-9 lead going into the final session Sunday was too much for the International team to overcome, even with a loud and boisterous Australian crowd behind it.

Ryo Ishikawa, Charl Schwartzel, K.T. Kim and Geoff Ogilvy got the International side going. But the outcome was never seriously in doubt. Furyk, David Toms and Woods were at the bottom of the lineup, and none ever trailed.

Toms routed Robert Allenby, 7 and 5, giving the Australian a dubious distinction. He joined John Huston (in 1998) as the only captain’s picks not to win a single point.

Furyk joined Woods, Shigeki Maruyama and Mark O’Meara as the only players to record a 5-0 record in the Presidents Cup. Furyk made an eagle on the par-5 second and beat Ernie Els 4 and 3.

Phil Mickelson, 3-0 going into singles, conceded the first three holes to Adam Scott and conceded another hole at the eighth to fall 4 down. He rallied far too late and lost, 2 and 1.