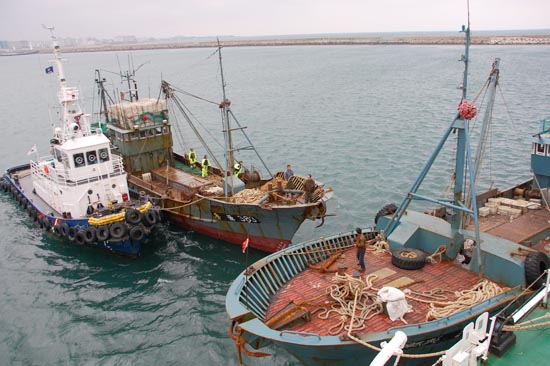 Three Chinese fishing boats were nabbed for crossing the maritime border and illegally operating in Korean waters by the Jeju Coast Guard on Saturday after an aggressive fight. [NEWSIS]


JEJU - Despite the Korean Coast Guard’s crackdown, illegal fishing by Chinese in Korean territory is not receding, and the fishermen are becoming more aggressive and systematic in avoiding Korea’s dragnet.

Three days after capturing 126 fishermen and 12 Chinese fishing boats, which were illegally operating near Ochong Island in Gunsan, North Jeolla, three Chinese boats were seized by the Jeju Coast Guard. The boats were 12 kilometers (7.46 miles) northwest of Chuja Island, 50 kilometers west of Jeju Island, according to the Jeju Coast Guard under the South Regional Headquarters. One boat was captured immediately, and two others were captured after they tried to help the seized vessel escape from the Coast Guard.

At 4:25 p.m. Saturday, a patrol ship of the Jeju Coast Guard tried to intercept one Chinese fishing boat to bring it to a port on Jeju Island for investigation. But the targeted vessel called for help and 25 Chinese boats responded, threatening the Coast Guard and demanding the release of the first boat. The Chinese sailors brandished axes, iron pipes and bamboo spears on the decks of their boats, the Coast Guard said.

Headquarters immediately dispatched 12 patrol ships and two helicopters, and they managed to capture two Chinese boats, identified as No. 283881 and No. 283882. Their sailors escaped on other boats. The Coast Guard chased the armada but lost them due to bad weather conditions.

The Coast Guard said five Korean officers were lightly injured in the melee with the Chinese.

“Money is the motive for this aggressive trespassing by the Chinese,” investigator Lee Jong-seok of the South Regional Headquarters told the JoongAng Ilbo. “I heard they earn more than 30 million won ($26,600) per operation. If they get busted by the Korean police, their boats get confiscated by the Chinese government and their fishing licenses get canceled, which is a matter of life and death for them.”