Where to dump tons of hot asphalt?

Where to dump tons of hot asphalt? 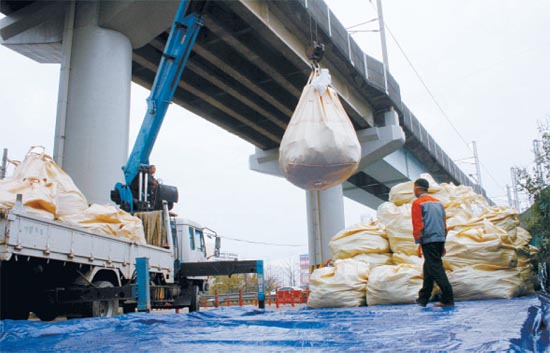 Facing criticism for having dumped radioactive asphalt in a local park, the Nowon District Office moved the material Thursday to a parking lot behind the district office building. [YONHAP]


When residents of Nowon District in northern Seoul complained to authorities that the asphalt paving in their neighborhood was radioactive, the local government moved quickly to dig it up and repave.

All well and good. But then government officials didn’t know what to do with the tons of radioactive material, and just kept dumping it wherever they could.

It’s currently in piles in a parking lot behind the Nowon District Office, and around 100 local residents staged a protest Saturday in front of the office in Sanggye-dong. 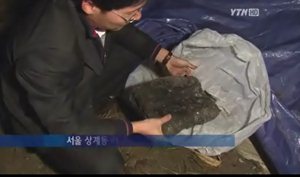 “The action of the office means that people in Wolgye-dong [where the asphalt was originally] can live, but we here should die,” an elderly woman at the protest shouted. “It’s total nonsense.”

A high school girl told reporters, “I always pass by the office on the way to school. It’s frightening that I may become sick in the future because of this radioactive material.”

On Nov. 1, a resident in the Wolgye-dong area reported that the asphalt near his house was emitting excess amounts of radioactivity. The state-run Korea Institute of Nuclear Safety (KINS) detected radioactivity in the asphalt 10 times more than the normal level, about 1.5 microsieverts per hour, and the Nowon District Office removed a total of 330 tons of asphalt Nov. 4 and repaved the area.

The cause of the radioactivity is not known.

However, the office came under fire on Nov. 14 when the media found that it had dumped a large amount of broken asphalt pieces in a park in the Sanggye-dong area, draping them with blue plastic.

The office planned to build a temporary holding area near Jungnang Stream in the district, but couldn’t after nearby residents objected. So the office moved the asphalt to the parking lot behind its headquarters.

According to the KINS, the asphalt should be disposed of in the low- and intermediate-level radioactivity repository in Gyeongju, North Gyeongsang. But the facility in Gyeongju is currently under construction and won’t be completed until the end of 2012.

The district office asked the Korea Electric Power Corporation (Kepco), the state-run electric company, to store the asphalt. But Kepco refused, saying its storage area in the district was filled to capacity.

Lee Ji-eon, an activist from the Korea Federation of Environmental Movement, said that the central government is passing the buck to the district office.

“The current law for disposal of radioactive material states that the person or an organization that caused the material to be contaminated should take the responsibility of disposing of the material,” Lee said. “But the central government and the district office haven’t clarified how the asphalt was exposed to radiation, so I think the central government should take the burden.”

“The Nowon District Office, which has a budget of only 40 million won, can’t handle the huge amount of contaminated asphalt by itself, without the help of the central government,” Lee said. “Kepco says its storage area is full, but we visited its disposal facility in our district and it had sufficient space to store the asphalt. They told us they need authority from the state-run Korea Institute of Nuclear Safety to dispose of the stuff.”

“The state-run Korea Institute of Nuclear Safety is keeping mum on the issue,” said Jo Min-gyeong, a resident of the district. “I think it’s time for the institute to take action.”