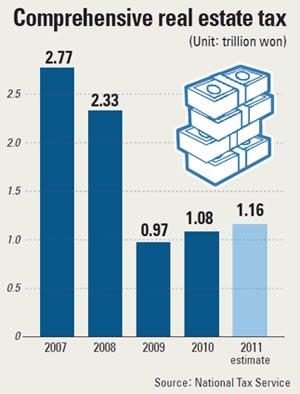 Additional taxes that have been levied on expensive properties across the nation for the last six years are expected to edge up this year despite the flagging real estate market.

The government expects to pocket 1.16 trillion won ($1.02 billion) this year in comprehensive real estate tax payments from a total of 251,000 private and corporate property owners, according to the Ministry of Strategy and Finance and the National Tax Service.

This compares to 1.09 trillion won amassed from slightly fewer owners last year, and marks a rise of almost 20 percent from 967.7 billion won in 2009.

The growing revenue stream is largely due to rising property values in rural regions, whereas the Seoul metropolitan area has seen prices dip, they said.

“Roughly one-quarter of those eligible to pay the comprehensive real estate tax will have more of a financial burden this year as the government-assessed value of their properties has gone up,” said an official at the tax agency.

“The rest will either see their tax payments shrink or remain largely unchanged from last year.”

The tax was introduced during the Roh Moo-hyun administration and implemented in 2005 to put a lid on the explosive growth of properties in affluent areas such as Gangnam District in southern Seoul.

The tax, which now ranges from 0.5 percent to 2 percent, was initially levied at single housing units valued at more than 600 million won, but this benchmark was moved up to 900 million won as Lee Myung-bak showed greater leniency when he took office in early 2008.

However, those with multiple houses that exceed 600 million won are subject to the tax as many of these second or third homes are treated as probable investments.

While it seems hard to fathom how tax-derived income could grow in this area given the slumping real-estate market, the government cited a rise in its assessed value of properties, particularly those in rural areas, which may not have yet been reflected in the market.

This becomes clearer considering that the tax is also levied at a rate of 0.75 percent to 2 percent on idle land worth over 500 million won, which could now be worth considerably more than when it was purchased.

The tax also applies to buildings, offices and stores worth over 8 billion won at a rate of 0.5 percent to 0.7 percent. This provided more income this year per unit as the government raised the amount that can be taxed from 75 percent to 80 percent of the assessed value.

The Ministry of Land, Transport and Maritime Affairs said that assessed property values rose by an average of 2.57 percent in the first six months of 2011 from the same period last year. By region, comparable growth rates stood at 2.32 percent for the Seoul metropolitan area, 2.87 percent for major cities and 3.14 percent for provincial areas, it said.

Within these three property groups, housing units were expected to yield the least amount of additional revenue this year, officials said.

This is partly because the number of high-end residential units worth over 900 million won fell by an average 6 percent this year to 80,362 households, the ministry said.

According to Budongsan 1 Beongji, which provides information on real estate values, the cost of cheaper apartments in the capital rose in the last five years while pricier properties dropped in value.

It studied the prices of 3.2 million apartments over the last five years and found that the percentage of properties worth less than 200 million won had dropped from 38 percent to 21.7 percent.

Experts said the number of low-priced apartments has shrunk as demand for them mushroomed after the 2008 global economic crisis, a trend that also drove up the cost of long-term deposits.

“Since the crisis, demand for housing has refocused on small apartments, which has driven up prices,” said Lee Nam-soo of Shinhan Bank.