Sometimes you have to play tough, says Choi

Sometimes you have to play tough, says Choi 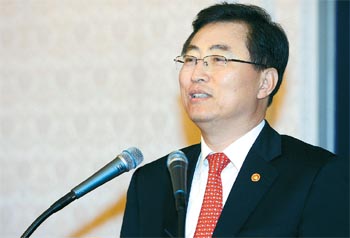 Former Knowledge Economy Minister Choi Joong-kyung said sometimes a government official needs to play tough to get things done and should not be afraid of receiving criticism.

Choi pointed out that despite a reduction in gasoline prices, oil refineries are still showing profits. He also stressed that electricity prices need to be raised drastically to help reduce electricity demand.

Choi, a long-time financial bureaucrat, resigned after taking responsibility for an unprecedented nationwide power outage on September 15. More than 1.62 million families across the nation faced power outages throughout the day without any notice. People were trapped in elevators, factories were forced to halt production and hospitals in many cities lost power for a while. The government then took heat for the unprecedented blackout.

His resignation comes just 10 months after he was appointed as knowledge economy minister by President Lee Myung-bak. The ministry is in charge of the country’s energy policies

He spoke with the JoongAng Ilbo prior to his last day in office on Nov. 16. Hong Suk-woo, former head of the Korea Trade-Investment Promotion Agency, officially replaced Choi on Nov. 17.

A. [The Sept. 15 blackout] was an unprecedented incident and with the Seoul mayoral by-election approaching someone had to take responsibility for the incident. When President Lee Myung-bak made a surprise visit to the headquarters of the Korean Electric Power Corporation just a day after the blackout, I emptied my heart.

My resignation came a little bit sooner than I expected. But a man involved in state affairs doesn’t have room for emotion because he can’t decide whether to continue or step down on his own will.

What was the core problem that caused the blackout?

The government should be able to control demand in a state of emergency. The government has asked companies to voluntarily limit their use of electricity, but only 30 percent of them joined the government’s move.

When I planned energy management policies for this winter, I gave an order to forcefully cut power supply to companies if they broke their promise to save electricity.

Isn’t that a tough way to deal the matter?

Our feet are in the fire now. I ordered working-level officials to come up with definite measures instead of elegant measures. Sometimes what seems as tough and unreasonable could be an answer to a problem. Things don’t work without criticism.

What exactly is an elegant measure?

The government also needs to sign power supply contracts with businesses and others consumers that use a lot of energy so that the government can come up with proactive measures for energy supply and demand.

There was criticism that you are intervening in the market too harshly on the price of oil.

There are only four oil refinery companies in Korea. The ministry needs to examine the industry to determine whether consumers get less benefit or not because only four companies are controlling the industry [by possible collusion]. If any wrong practices are found, the ministry’s job is to correct them.

As a result the oil price went down by 100 won (0.08 cents) per liter and the people benefited from it. Oil companies made profits despite the price cut.

You also mentioned large companies are paying too much in salaries for senior management and they should reduce that amount and instead invest in young adults to prepare for the future.

If a large sum of salaries went toward recruiting senior executives in a competition, that would be understandable. But the reality is different.

Many talented and smart young adults don’t even get a chance to show their ability while a few senior executives get excessive wages. That’s not market principles.

What do you think of the nickname Choitler [combination of Choi’s last name and German dictator Adolf Hitler] you picked up at the Finance Ministry?

Someone needs to block speculators and sometimes that causes losses. But such losses are costs incurred from running government policies.