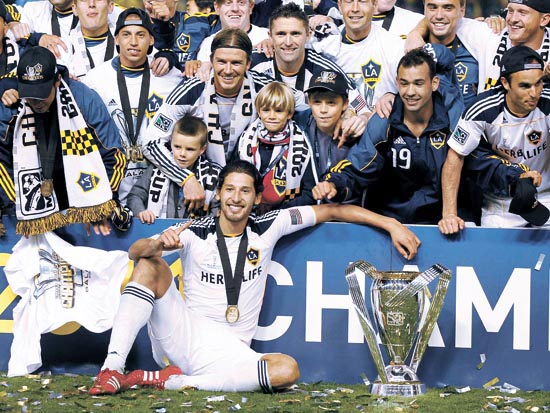 
CARSON, California - Los Angeles’ star trio David Beckham, Robbie Keane and Landon Donovan combined for the winning goal as the Galaxy claimed the Major League Soccer title with a 1-0 win over the Houston Dynamo on Sunday.

Beckham won his first MLS championship in the final game of his groundbreaking five-year contract with the Galaxy, who rolled through the playoffs to the franchise’s third league title after finishing with MLS’ best regular-season record.

“I’ve wanted to be successful for the Galaxy for five years, and tonight, I have that,’’ Beckham said.

The winning goal came in the 72nd minute. Beckham flicked on a header to Keane, who made a run and eventually fed the ball to Donovan, who struck home his record 20th MLS playoff goal.

“To be honest, the actual goal doesn’t mean a lot to me,’’ said Donovan, selected as the MLS Cup MVP. “For the last two months, we’ve just been so determined. I didn’t care if it was an own-goal that won it. Winning feels so good.’’

Beckham lifted Donovan off his feet with a hug after the final whistle in the Galaxy’s record seventh appearance in the league title game.

Los Angeles has the most expensive and high-profile squad in MLS history after Irish striker Keane joined this season from Tottenham to become the third pin-up star.

The Galaxy got full value from their three highest-priced players, particularly in the playoffs. Beckham’s assist was his fourth of a stellar postseason, while Donovan scored in each of the Galaxy’s final three playoff games, and Keane was a serious offensive force despite criss-crossing the Atlantic on Irish national team duty.

A sellout crowd of 30,281 at Home Depot Center - where the Galaxy didn’t lose a game all season long - cheered Los Angeles past the Dynamo, who hadn’t lost in nine games since Sept. 10. Houston struggled for attacking options after losing leading scorer and league MVP runner-up Brad Davis to a torn quadricep in the Eastern Conference championship game.

Beckham put a stylish finish on the best season of his five-year stint with the Galaxy. The English superstar hasn’t decided where he’ll play next year, but the Galaxy hope he extends his California sojourn for at least another season.

“It’s been the most enjoyable time of my career in America over the last year, and this just tops it off,’’ said Beckham, whose services are coveted by Paris Saint-Germain and a handful of British clubs. “I’ve said before, I need to sit back and relax and enjoy this moment, and then I’ll figure out what I’m going to do next year. I might talk in the past tense sometimes, but that doesn’t mean I’m not coming back.’’

After the game, Donovan revealed Beckham strained his hamstring during training earlier in the week, while coach Bruce Arena said Donovan has been struggling with undisclosed injuries for several weeks.

“David is a champion,’’ said Arena, the first coach to win three MLS titles. “I’ve been around great athletes and competitors in my life, and this guy is as good as it comes. Unbelievable desire to win. He’s a great teammate, a great person.”