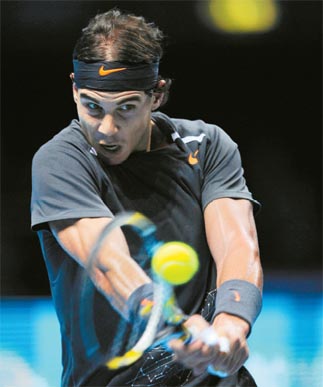 Rafael Nadal of Spain hits a return to Mardy Fish of the U.S. during their tennis match at the ATP World Tour Finals at the O2 Arena in London, Sunday. [REUTERS/YONHAP]

LONDON - A sickly Rafael Nadal was pushed to the limit by Mardy Fish in his opening match at the ATP World Tour Finals on Sunday before joining great rival and defending champion Roger Federer at the top of Group B.

The Spaniard, playing his first competitive match after a month-long lay-off, needed nearly three hours and a rush to the toilet because of a “terrible stomach” to subdue the American tournament debutante, winning a late-night thriller 6-2 3-6 7-6.

Federer began the season-ending championships, being held in London’s dazzling O2 Arena for the third of five years, with victory over French powerhouse Jo-Wilfried Tsonga, although he was also given a scare in a 6-2 2-6 6-4 victory which raced by in 88 minutes of high-octane hitting.

After ripping through the first set in 21 minutes, world number four Federer, bidding for a record sixth title at the ATP’s blue riband tournament in his 10th appearance, lost his way and Tsonga threatened a repeat of his victory over the Swiss maestro in this year’s Wimbledon quarter-finals.

On that occasion Tsonga floored 16-times grand slam champion Federer from two sets to love down but this time he could not complete his fight back, cracking in the 10th game of the decider to Federer’s obvious relief.

Serving to stay in the match Tsonga fluffed a routine volley, then served a double fault before Federer whipped a forehand winner to set up three match points.

Tsonga saved the first but then Federer benefited from a miss-hit return which dragged his opponent out of position and allowed him to fire a match-winning backhand.

“It’s not always in your control when you play Jo,” world number four Federer, who had former France international football star Thierry Henry in his support box, told reporters.

“Today I had flashes of that [Wimbledon] match because I didn’t have much chance for a while on his serve.

“Once he got the upper hand in the second set he started to swing more freely and got really dangerous. I just tried to stay calm and wait for my chance.

“We saw some ups and downs from both players, that’s why I’m pretty happy to come through.”

While Federer got a bit lucky when Tsonga capitulated at the death, Nadal had to rely on his endless reserves of fighting spirit to scrape past Fish.

“The third set was a bit crazy,” the 25-year-old told reporters. “I felt very bad from the stomach since the beginning of the third. I was seriously really lucky for the victory.”

Asked what the problem was, Nadal said it was a mystery.

“I ate pasta and salmon at the hotel before the match, nothing strange, nothing unusual,” said Nadal who will face Federer in their eagerly anticipated Group B match on Tuesday.

“I am worried about getting better for practice tomorrow.”

Fish, the only one of the eight-man field never to have played in the season ending tournament, made a slow start, dropping his opening service game to hand Nadal the initiative.

While there were a few slow hand claps from the crowd, Fish was not disputing Nadal’s call of nature.

“I just assumed that he wasn’t feeling well. We’ve all been there,” the 29-year-old said. “I didn’t think he was trying to ice me or anything. I have a ton of respect for him.”