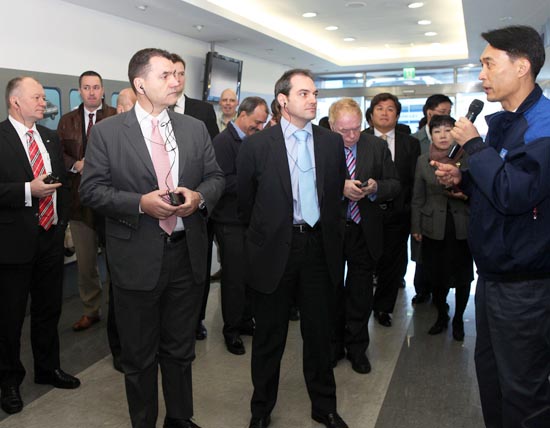 Foreign executives tour GM Korea’s manufacturing plant in Bupyeong, Gyeonggi, yesterday, as part of an event organized at the request of the Korea Chamber of Commerce and Industry and InterChamber. Provided by the company


Foreign companies often use the example of GM Korea and how it established roots in the local market as a benchmark for success.

Since the company introduced the Chevrolet brand to the Korean market in March of this year, the local unit of U.S. automaker General Motors has seen on-year sales jump 20.8 percent. 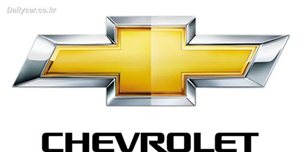 This marks the highest rate of growth in the carmaker’s history and is attributed to the aggressive manner in which it has pumped out new products as well as improved customer service.

As part of efforts to expand its market share with an improved brand image, it also removed Daewoo from its name.

Yesterday, at the automaker’s manufacturing plant in Bupyeong, Gyeonggi, foreign executives were afforded a peek into the automaker’s operations before meeting Mike Arcamone, its president and chief executive.

“I think we have all had similar experiences of doing business in Korea as members of companies with significant foreign investments,” Arcamone told the executives.

Arcamone explained the challenges the automaker faced and how it survived in the competitive auto industry amid a local business environment that he said is in a constant state of flux in terms of technology and design.

He said success hinged on moving the hearts of Korean consumers, who are both passionate and curious about global brands.

Around 25 executives, including Hermann Kaess of Robert Bosch, Tsutomu Awaya of Mitsubishi, Grant Phillips of Nestle and Simon Bureau of the Canadian Chamber of Commerce in Korea, participated in the event. It was organized by the automaker at the request of InterChamber, an informal affiliation of foreign chambers of commerce in Korea, along with the Korea Chamber of Commerce and Industry.

“The tour was very constructive as we exchanged information about operational issues, blending and how the company went through the brand name change,” said Bureau, the CanCham chairman, adding that GM Korea was chosen as its first tour target because of its sizeable export activity.

An official from the Korea Chamber of Commerce and Industry said that InterChamber plans on holding similar events roughly every quarter.

“We will look for more success stories among global firms that have settled in Korea so that other foreign companies will be able to benchmark them,” Lee explained.