The rise-and-fall dynamics in the global TV market are more evident than ever.

While Korean TV makers like Samsung Electronics and LG Electronics are expanding their share and strengthening their grip on the market, their Japanese counterparts, Sony and Panasonic, are drowning in red ink and rethinking how they operate. Those who lived in the 90s would certainly know that this is not the way things have always been.

Back then, Japanese TVs were significantly more advanced in technology. The TVs wowed the industry with their clarity and vividness. They also were a favored brand. Owning a Sony TV was an indication of wealth and status. In the meantime, Korean TVs were just a cheap alternative.

“Where is Sony now? With a focus on only functionality, companies can easily lose consumers,” C. W. Park, a professor of marketing at the Marshall School of Business at the University of Southern California, told the JoongAng Ilbo in a recent interview.

Park was highlighting the importance of selling values and philosophies - in addition to functionality - in order to stay in the game for a long time. He was recently awarded a fellowship from the Society of Consumer Psychology, which is known as the “Nobel Prize in marketing.” But as is always the case in this fast-changing, neck-and-neck technology world, today’s winner could be tomorrow’s loser. It’s a big mistake to think that Korean companies will be an exception. Such is especially true given the rapid growth of Chinese manufacturers.

“Within ten years, most of Samsung’s key businesses and products will disappear. We must start over,” said Lee Kun-hee, the chairman of Samsung Electronics, in March of last year. TVs, mobile devices, chips and panels are the four pillars of the company at present.

Add to that a gloomy forecast for the TV business due to financial crises in advanced countries, and it’s a no-brainer that Korean TV makers have more to worry about when devising their strategies for the coming months and years. 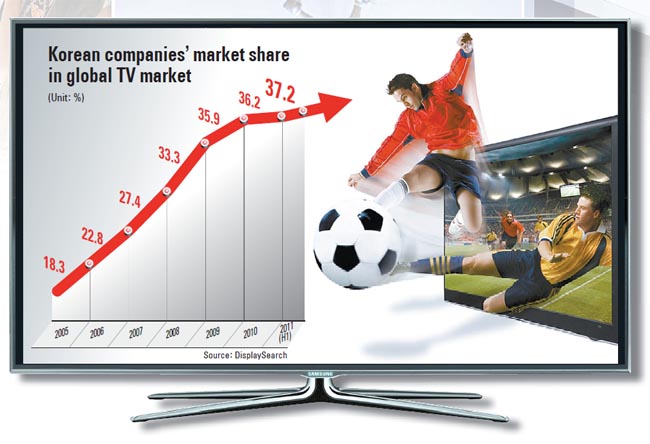 Samsung Electronics - the world’s top maker of flatscreen TVs, LCD (liquid crystal display) panels and computer memory chips - overtook Sony as the leader in the global TV market in 2006 to the market’s surprise.

Since then, Samsung has remained the “king” in the TV world for six years straight - maintaining a 20-percent range market share for the last three years.

Runner-up LG Electronics also caught up fast. It dethroned Sony in 2009 and has been closely trailing Samsung ever since. But the mood is certainly different for Japanese TV powerhouses.

Unfavorable factors abound. They have been hit by high production costs resulting from the recent record-breaking strength of the yen, as well as effects of the country’s earthquake and tsunami in March, plus the flood in Thailand, which houses hundreds of Japanese parts and assembly plants. The Financial Times reported recently that Sony and Panasonic are shrinking their operations dramatically, saying that while they “dominated the world’s living rooms for much of the analog era,” they have acknowledged that “they have failed to compete in the age of digital flatscreens.”

According to the FT report as well as other sources, Sony will halve its mid-term sales target for LCD TVs to 20 million a year, while Panasonic will also nearly halve its flatscreen panel output to 7.2 million a year.

“Investor interest is starting to switch away from whether [Sony] is going to be able to regain past glories to whether this even becomes academic,” Pelham Smithers, an analyst and director at Pelham Smithers Associates told the FT.

Panasonic will reduce plasma TV panel production and lay off about 1,000 people, a source told Reuters on Thursday, as its loss-making television unit struggles to compete with Asian rivals like Samsung Electronics. Reuters also reported quoting an unnamed source that Panasonic will soon stop plasma panel production at its Amagasaki No. 3 factory in Hyogo Prefecture, and is considering selling off an LCD panel plant in Mobara in Chiba Prefecture, the source said. Should that be true, Panasonic is just one of many Japanese firms thinking twice about their TV commitments.

Sony had already began edging away from in-house production, for instance by selling factories in Slovakia and Mexico to the Taiwanese contract manufacturer Hon Hai. Hitachi is looking at outsourcing all its production to foreign contract manufacturers, while Sharp is converting some of its domestic production capacity to making smaller screens for smartphones and tablet computers.

Buoyed by such movements, reports also surfaced in September that Samsung is considering a re-entry into the Japanese TV market. The company quit the country four years ago, failing to break through Japanese consumers’ loyalty and preference for home-grown brands.

LG also restarted TV sales in the neighboring country in November 2010. Japan’s TV market is estimated to reach 14.5 million units this year, according to DisplaySearch, a market researcher, which is about seven times the Korean counterpart.

But the problem is that the global TV market itself is in such a challenging period now. According to DisplaySearch, the market will see zero-percent growth this year, due to weak demand in the U.S. and Europe, which are both battling one of the worst financial crises in history.

Global shipments of TVs are forecast to total 248 million units this year, the company said in October.

“Demand in regions like North America and Europe has fallen short of expectations as persistent economic problems have made consumers cautious in their spending and high-value seeking,” said DisplaySearch in a statement. “Emerging markets continue to show good growth, but it is not strong enough to offset the weaker demand in developed markets and, as a result, we have lowered our unit forecasts for LCD and plasma TVs.”

Against this backdrop, Samsung Electronics confirmed recently that it has scrapped its plan to develop 3-D TVs with RealD amid lingering uncertainties in the global TV industry. Such reports surfaced earlier in foreign media such as Bloomberg and Reuters amid lackluster sales of high-end TVs, including 3-D TVs.

A Samsung spokesman told Yonhap News Agency that the company is no longer pursuing the development of active shutter 3-D TVs - which refers to a type of 3-D TV technology - with RealD, a California-based 3-D technology licensor. Such a deal was announced earlier this year.

Market observers suggest that TV makers beef up their lineup of small and mid-sized TVs as well as low-cost TVs as they will likely do well next year. That is because demand for such products is high in emerging markets, where most of the demand for TVs will come from. That means that Korean TV makers will have to rethink their strategies, as in recent years they have clearly focused more on premium, high-end TVs.

According to Consumer Reports’ Nov. 2011 issue of “Best Products of the Year,” Korean brands took top positions in 40-inch models but that wasn’t the case in smaller sizes. A Panasonic TV was ranked the best in 37-inch models and a Sanyo TV reigned in the 27-inch sizes.

Sources at Korean television manufacturers, however, say they are ramping up their TVs with smaller sizes and cheaper price tags for coming months.

“Just lowering the price doesn’t guarantee success,” an insider at one of Korea’s consumer electronics firms said. “We need to keep the quality high, while securing price competitiveness in order to set our products apart from Chinese or Taiwanese counterparts.”

Another official said interest has gotten higher on more affordable TVs in Korea as well, which gives Korean companies an advantage when fighting a similar battle in the global field.

“It’s not like there weren’t smaller TVs in the product lineup of each company before. But with the recent popularity of ‘E-Mart TVs,’ it is true that people got more interested in affordable TVs,” he said. “As demand for such products will likely increase, we are preparing for such changes in the market.”

Another growth engine in the stagnant market is thought to be “smart” TVs.

While many people may be hesitant to pay big bucks for large, gorgeous TVs, they may be willing to splurge on TVs that are compatible with their iPhones and iPads as well as other hot-selling smartphones and tablets.

This year, market watchers including DisplaySearch forecast one in every four TVs sold worldwide to be a smart TV.

“We expect that in 2015, 35 percent of 46-inch or larger TVs in North America will be smart TVs, defined as having the following capabilities: able to retrieve content from the Internet without the restrictions of a portal; intelligent search and recommendations; upgradable by its owner; and able to network seamlessly with other devices in the home,” said Paul Gray, Director of TV Electronics Research at DisplaySearch.

But the problem in this segment for Korean TV makers is the rising power of nontraditional TV makers - Google and Apple. On Oct. 31 Google unveiled the latest version of its TV service, Google TV 2.0. The first-generation Google TV - a collaboration between Google, Sony and Logitech - was showcased at the IFA consumer electronics trade show in Berlin last year. Also, speculation is building that Apple has spent years trying to perfect its TV set device, which some media have already dubbed the iTV, and is slated to launch it soon. This is not to be confused with Apple TV, which is just a set-top box that allows users to access digital content from the Internet on their television sets.

Kim Dong-won, an analyst with Hyundai Securities, said Korea’s tech titans are right to feel threatened as “we are witnessing a power shift from hardware companies to software companies in the IT business.”

Lee Ho-geun, a business administration professor at Yonsei University, also warned in a column: “Sony was far and away No. 1 in the global TV market before, but that is no longer the case. In much the same way, Samsung’s stranglehold could well be threatened when the top players in the mobile platform market switch over.”

The company said such a plunge was due to Chinese television manufacturers’ aggressive move to play catch-up and expand their presence with cheaper products. Chinese firms enjoyed 45 percent of China’s 3-D TV market in the first quarter, more than three times the 14-percent share in the previous quarter.

All View Consulting said China’s TV makers such as Hisense and Skyworth have narrowed technology gaps with the foreign rivals but are offering similar products at cheaper prices. That is why some critics fear that Samsung could be the next Sony, and Chinese firms could be the next star in the drama of the TV business world.

Li Dongsheng, president of TCL Corporation, said in September “By learning from the experience of Korea’s industrial rise, China’s manufacturing industry should use the country’s economic strength and market potential as a driving force.”

Guangdong-based TCL was founded in 1981, and has grown to become one of the leading television producers in the world.