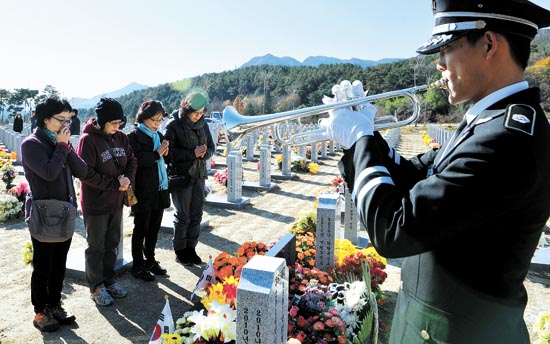 Two days before the one-year anniversary of the Yeonpyeong Island shelling on Nov. 23, 2010, when North Korean forces fired artillery shells killing two marines and two civilians on the island, a soldier plays a requiem at the Daejeon National Cemetery as civilians pay their respect in front of the graves of Sergeant Seo Jeong-woo and Private Moon Gwang-wook who were killed in the first attack on South Korean territory since the Korean War. The requiem will be played until the 25th at 11:00 a.m. every morning in memory of the fallen soldiers. [YONHAP]