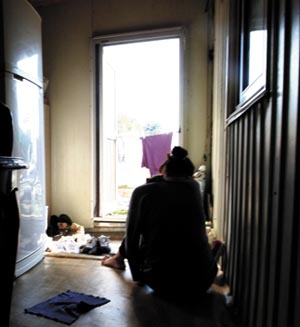 The gang-rape victim in Jangheung, South Jeolla. By Oh Jong-chan

Following the release of the film “Dogani” (“The Crucible”), which told the real story of rampant sexual abuse at a school for hearing-impaired students, more cases of sexual abuse of the disabled have been reported in several parts of the country.

In a small village in Jangheung, South Jeolla, a 51-year-old farmer surnamed Kim heard a rumor from neighbors that some of the men in the town were suspected of raping a local disabled girl.

He never imagined his 21-year old mentally disabled daughter was the victim until a neighbor informed him he witnessed her gang rape by several men in the town.

The police said Kim’s daughter testified that the three suspects raped her on numerous occasions at their homes or stores over the past seven years. The police said the offenders run a market and stationery store that the girl had patronized since she was a middle school student.

“My daughter only has the intelligence of an eight-year old, and the people in the village, the people I’ve trusted, have raped my daughter for almost 10 years,” Kim told the police during the questioning.

“I moved to this village because I’ve expected the ways of the people would be better than in big cities, but it turned out to be the very opposite way.”

The police charged suspect Lee with rape and detained him, and charged Oh and Yoon with suspicion of rape without detention. The police said they are investigating 10 other residents on suspicion of raping Kim’s daughter.

According to the South Chungcheong Metropolitan Police Agency, they are currently investigating a male teacher at a special education school in Cheonan on suspicion of raping a 19-year-old school girl, who is mentally disabled, for two years.

A Cheonan-based civic group was inspecting local special education schools and public day care centers for disabled students, and it secured the victim’s testimony when it held a consulting session with students.

“We questioned the victim and the suspect last week,” Lee Si-jun, a police investigator told the JoongAng Ilbo. “But we’re having troubles in running the investigation because it’s hard to get clear testimony from the victim because she is disabled.”

The suspect denied the accusation, telling police he never attempted to rape the student.

The school temporarily suspended him from work.