A lot on the line as Suwon takes on Ulsan tonight

A lot on the line as Suwon takes on Ulsan tonight 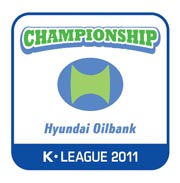 Suwon Samsung Bluewings FC and Ulsan Hyundai FC will square off in the second round of the Korean Professional Football League (K-League) playoffs tonight. A victory would give either team a pass to the next round and a ticket to the Asian Football Confederation Champions League.

Suwon and Ulsan reached the second round by beating Busan I’Park FC and FC Seoul over the weekend. The winner of this match will advance to the third round against the Pohang Steelers on Saturday, but will also earn a berth in the Asian club competition next season. A total of four AFC Champions League slots are allocated to the K-League. With regular-season winner Jeonbuk Hyundai Motors FC, runner-up Pohang and FA Cup winner Seongnam Ilhwa Chunma FC already earning their spots, the K-League decided to give one pass to the winner of this match.

For this match, Ulsan will especially look for revenge over the FA Cup semifinal in August, in which they suffered a 3-2 defeat in overtime despite leading 2-0 until the 77th minute.

“The defeat in the FA cup is giving players motivation to win,” Ulsan coach Kim Ho-kon said. “It’s going to be a very interesting game.”

Experts said Suwon should be aware of Ulsan’s powerful plays in the air, where they set up headers for taller players with accurate crosses.

In the regular season, 16 of 33 goals scored by Ulsan were from headers. The team has 1.96-meter (6-foot-4) striker Kim Shin-wook as well as 1.85-meter defender Kwak Tae-hwi who is the team’s best scorer with eight goals in the season. Veteran forward Seol Ki-hyeon, who once played for Fulham FC and Reading FC in the English Premier League, will lead the team’s attack from the flanks.

But Suwon coach Yoon Sung-hyo said they are not really worried about Ulsan’s big players as defender Mato Neretljak will stop them in the air. The 1.86-meter Croatian also scored two goals against Ulsan this season. Suwon is considered to have the better midfield, comprised of Oh Jang-eun, Lee Yong-rae and Park Hyun-bum.

“Suwon’s speed has been revived and players have gained their confidence,” SBS football commentator Jang Jee-hyun said to Ilgan Sports, the JoongAng Ilbo’s daily sport newspaper on Monday. “Their midfield is strong and it will be tough for Ulsan to get through the middle line.”

For the attack, Suwon lost Macedonian striker Stevica Ristic after he was suspended for a brawl that occurred during the AFC Champions League semifinal against Al Saad last month. However, 24-year-old striker Ha Tae-goon has stepped up to fill his void, scoring the game-winning goal against Busan.

And team captain Yeom Ki-hun, who setup Ha’s goal with his accurate free kick, has been showing top performance throughout the season. The 28-year-old winger moved from Ulsan to Suwon last year and will try his best since this is his last season before serving his military duty.