Chong Tae-hyon set to take his shot at MLB

Chong Tae-hyon set to take his shot at MLB 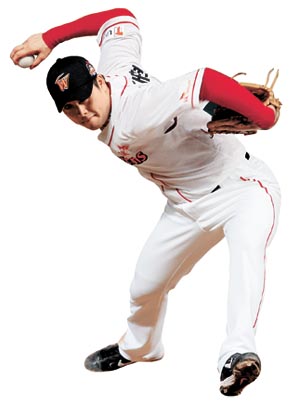 Korean pitcher Chong Tae-hyon said yesterday he is set to sign with the Baltimore Orioles in the Major League Baseball (MLB) league, hoping to become the first player to jump straight from the Korea Baseball Organization (KBO) to the big leagues.

In an interview with Ilgan Sports, the JoongAng Ilbo’s daily sports newspaper, Chong said he received a solid offer from the American League’s Orioles and will sign the contract after he passes the medical test.

“I’m satisfied with the contract terms,” Chong said. “When I declared I was going to the MLB, I decided not to sign for a small salary because of my pride for the KBO and for other young players who wish to play here in the future.”

There are many Koreans who have played in the MLB, but if the contract is sealed Chong will be the first player to go directly to MLB after playing in the KBO.

Former Korean major leaguers like Park Chan-ho, Kim Byung-hyun, and Choo Shin-soo, the only Korean player currently playing in the MLB with the Cleveland Indians, have not played in the Korean Professional Baseball League. Former pitchers Koo Dae-sung and Lee Sang-hoon played in Japan’s Nippon Professional Baseball before moving to the United States.

“It’s fortunate that I got a good deal that isn’t shameful to our young players in Korea,” Chong said. “I really want to say thank you to my agent. He gave me a good deal.”

Chong was listed as a free agent this season from Incheon SK Wyverns. He called off salary negotiations with the Wyverns on Thursday and left for the U.S. the next day to pursue his career in the MLB.

The Kyung Hee University graduate is also renowned for his performance in international tournaments. Chong was the only college student on the Korea national team that won a bronze medal at the 2000 Sydney Olympics.

Korean fans praised Chong when he helped to win the gold medal against Cuba in the 2008 Beijing Olympics. The right-hander also pitched at the 2009 World Baseball Classic where Korea finished as runner-up behind Japan.

Dan Duquette, the Oriole’s executive vice president of baseball operations said on the team’s Web site that the organization was “very interested” in signing the Korean free agent, saying Chong has a “unique delivery” and “has gotten results on the world stage when it’s counted.”

Experts said that Chong isn’t a fast pitcher, but is renowned for having pinpoint control with subtle movements with the ball. He is expected to play as a reliever for the Orioles. Chong said he is ready to show his 11-season KBO experience in the big leagues.

“I’m not here to just play in the Major League, but to show I can pitch better,” Chong said. “From now on, I will just think about how to throw good pitches.”

Meanwhile, in the Korean baseball FA market yesterday, two free agents have signed with new clubs. Catcher Cho In-sung moved from the Seoul LG Twins to the Wyverns, while former Wyverns pitcher Lee Seung-ho agreed to a deal with Busan Lotte Giants. Cho, 36, signed a three-year deal that is worth 1.9 billion won ($1.6 million) with the Wyverns, while the 30-year-old lefty Lee inked a four-year deal worth a maximum 2.4 billion won.

That leaves Seoul Doosan Bears’ third baseman Kim Dong-joo as the only available signee from the FA market.