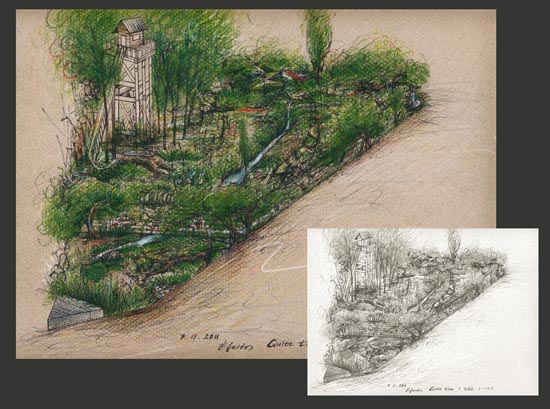 Hwang Ji-hae’s sketch of the DMZ garden, which she will display at this year’s Chelsea Flower Show in London in May. Hwang won the best garden award at last year’s show. [YONHAP]


Hwang Ji-hae, the artist who won the best garden award in the artisan garden category at this year’s Chelsea Flower Show in London with a work that drew attention because its centerpiece was a traditional outdoor toilet, will exhibit her latest work at this year’s show in May.

“Quiet Time: DMZ Forbidden Garden” was created to coincide with the 60th year since the establishment of the Demilitarized Zone between North and South Korea. The centerpiece of this year’s work is an 8.5-meter-tall guard post representing the tension between the two countries while also serving as a watchtower over the pristine surrounding environment.

The garden will also contain a barbed-wire fence similar to the one used on the Military Demarcation Line. Underneath this, there will be a small stream, signifying that although people cannot cross over the fence, water still flows through South and North Korea.

The boundary behind the garden will be constructed with trenches, stone walls and burned twigs.

To create the rest of the greenery, Hwang will use plants that grow in the DMZ and are indigenous to Korea, though moving the plants to England for the flower show will likely be just one of the obstacles she will face in bringing her creation to life. Once in London, Hwang will also have to see that the plants adjust to the new climate. 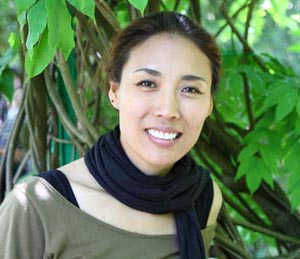 Hwang was the first Korean to exhibit work at the Chelsea Flower Show. She captured the attention of judges and viewers at last year’s show with her garden, titled “Hae-woo-so,” which she said was inspired by the traditional Korean philosophy that cleansing the body is akin to cleansing the mind.

The garden was displayed in a very traditional Korean style in a natural setting of Korean wildflowers and plants, including deodeok roots and white dandelions. The work recreated a simple Korean-style bathroom made out of wood and also contained a porcelain lantern and rock fences covered in moss.

In the work she plans to bring to London this year, Hwang plans to include the names of English soldiers that fought in the Korean War.

“This year in London, I’ve met soldiers who fought in the Korean War,” Hwang said. “Providing some consolation to those that have gone through such torment for so many years is the least I can do.”

Her only remaining task, she said, is to find a sponsor. Her “Hae-woo-so” garden was comparatively small, 20 square meters (215 square feet) as opposed to the 200 square meters for the new piece, so financing was relatively easy. The DMZ garden, however, is larger and will therefore have more requirements for transport and construction.

Hwang said she is looking forward to returning to London and hopes the show will attract global attention.

“People in England have a great love for gardens and this flower show has continued for 180 years,” Hwang said. “With Diamond Jublee, the 60th anniversary of Queen Elizabeth’s ascendance to the throne,and the London Olympics next year, it will be a good opportunity to draw attention to the event. Different countries have already voiced their support and I hope companies in Korea show interest in the event as well.”