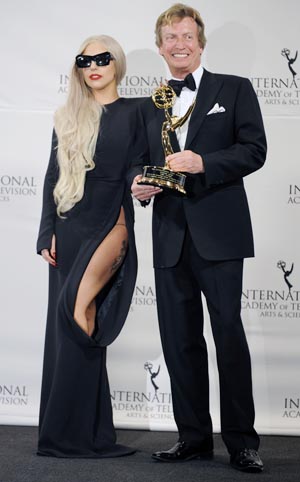 Lady Gaga, left, and producer Nigel Lythgoe pose after she presented him with the Founders Award at the 39th International Emmys on Monday. [AP]

“Accused,” written and created by Jimmy McGovern, received the Emmy for best drama series at the 39th Annual International Emmy Awards ceremony at the Hilton New York Hotel. The anthology tells the stories of people accused of crimes as they sit in holding cells beneath the courtroom awaiting the verdict in their trials.

The ceremony kicked off with a surprise appearance by Lady Gaga, wearing a tatooed thigh-revealing, floor-length black gown and oversize sunglasses, who presented the honorary International Emmy Founders Award to Britain’s Nigel Lythgoe, executive producer of “American Idol” and “So You Think You Can Dance?”

Gaga praised Lythgoe as her favorite producer and expressed gratitude for “all of the early opportunities he gave me to perform on TV.” She also cited the more than $140 million he has raised for charity through “Idol Gives Back” and his Dizzy Feet Foundation that provides scholarships to young dancers.

“He has always helped to nurture and foster my ideas, no matter how crazy or demographic-unfriendly they may have been,” said Gaga, before introducing a video tribute to Lythgoe featuring “Idol” judges Randy Jackson, Steven Tyler, Jennifer Lopez and host Ryan Seacrest. “He always spoke poetically about the pursuit of widening the boundaries of love and acceptance in TV.”

Lythgoe returned the favor by calling Gaga “the most creatively talented woman in the world of show business right now.” But he couldn’t resist taking a few good-natured jabs at former “Idol” judge Simon Cowell, who received the Founders Award last year.

“I now call Simon Lord Voldemort because he must not be named because every time I name him the press say that we’re enemies and we’re fighting each other,” Lythgoe said. “That’s not true at all. Simon has no enemies whatsover in the world. He just has a lot of friends who hate him.”

“Accused” originally wasn’t even among the nominees in the drama category. But it ended up replacing another British crime show, “Sherlock,” after it was determined that the updated version of the Sherlock Holmes mysteries had also been nominated for a Primetime Emmy Award in the United States. The rules bar a program from being entered into the two Emmy competitions in the same year.

Eccleston, the former “Doctor Who” star, won the best actor award for his role in an episode of “Accused,” in which he played a financially stressed, lapsed Catholic plumber who’s struggling with an adulterous relationship and financing his daughter’s wedding. After praying to God, he finds a packet of 20,000 pounds ($31,000) in the back of a taxi, doubles his money in roulette, but ends up on trial after the windfall turns out to be forged notes.

Walters, who earlier won a British Bafta TV Award for the same role, was chosen best actress for the TV film “Mo.” She portrayed the late Mo Mowlam, the unorthodox British politician who battled a brain tumor that she concealed from Prime Minister Tony Blair while working to forge the 1998 Northern Ireland peace accord.

The other British winners both centered around teenagers in unusual circumstances. “Gareth Malone Goes to Glyndebourne” won in the arts programming category for its account of the staging of a new opera by untrained teenagers at the renowned British opera house. The Emmy for nonscripted entertainment went to “The World’s Strictest Parents,” which takes unruly British teens and sends them abroad to live with a strict host family.

Forty nominees from a record 20 countries were competing in 10 categories for International Emmys, honoring excellence in television programming outside the United States, at the ceremony hosted for the second straight year by former “Beverly Hills 90210” star Jason Priestley.

The award in the TV movie/mini-series category went to Sweden’s “Millennium,” based on the late Stieg Larsson’s best-selling trilogy that follows investigative journalist Mikael Blomkvist and the antisocial computer hacker Lisbeth Salander as they unravel various crimes. A real-life family drama, Canada’s “Life with Murder,” about parents struggling to decide how to relate to their son after he’s accused of killing his younger sister, was chosen the best documentary.