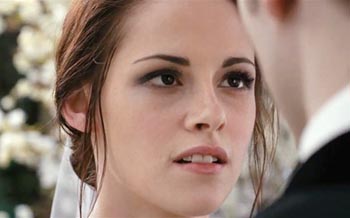 LOS ANGELES - “Twilight” fans can have their very own fairy-tale wedding experience next year when Carolina Herrera’s CHNY boutiques begin selling gowns in the same design as worn by Bella Swan in “Breaking Dawn - Part 1,” the apparel maker’s spokesman said on Monday.

The white sheath wedding dress with a lace-embellished back was custom-made for actress Kristen Stewart by New York fashion designer Herrera, who said she was “flattered” when asked to create the gown and felt the pressure to deliver something that would please “Twilight” fans.

“I wanted to create a magical moment that they had at the wedding,” Herrera told Reuters at the movie’s red carpet premiere last week.

“She’s an innocent girl that is finding her first true love, so there is romance, there is magic, there is everything together,” Herrera said.

Ahead of the film’s debut, the details of Bella’s dress seemed as closely guarded as Alexander McQueen’s gown for this year’s British royal wedding. But fans of “The Twilight Saga: Breaking Dawn - Part 1” were finally able to see it for themselves when the film stormed worldwide box offices over the weekend, taking in $238.5 million.

No further details have been released from Carolina Herrera regarding how many dresses will be produced or their retail price, but for “Twilight” fans eager to wear the dress down the aisle before next year, bridal dress company Alfred Angelo are already selling replicas from $799 in select stores worldwide.