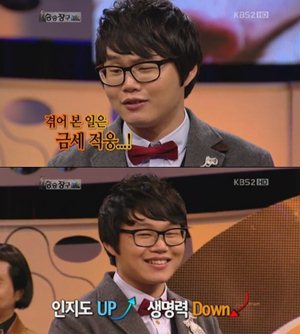 Comedian Choi Hyo-jong has made his first public appearance after having been sued last week by Kang Yong-seok, an independent lawmaker, for collectively defaming lawmakers.

On the Nov. 2 edition of KBS’s popular sketch comedy “Gag Concert,” the comedian said during one sketch, “It’s easy to become a lawmaker. All you have to do is get close to the leaders of the ruling party, become a candidate on the party’s ticket and run for election in a district that’s a stronghold of the ruling party.”

Choi, who had been silent since Kang sued him, revealed his feelings about the incident for the first time on the KBS-2 TV talk show “Win Win,” which aired yesterday. On the show, the comedian stood by his comments, saying, “Comedy that doesn’t contain any thought is not comedy, but a cute gesture. True comedy requires a backbone.”

After news of the lawsuit hit local media outlets, comedian Kim Mi-wha showed her support for Choi, who said on her Twitter page that he should countersue because lawmakers often insult each other by saying that their comments sound like something a comedian would say.

Kang was kicked out of the Grand National Party last year for making sexist remarks about female TV announcers.