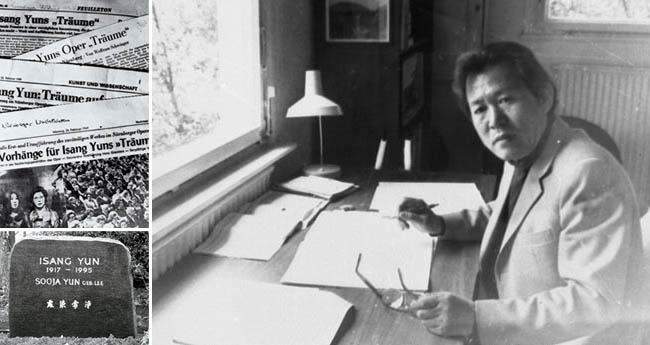 Isang Yun, who was born in Tongyeong, South Gyeongsang, and later obtained German citizenship, became a world-renowned musician in the late 1950s with compositions that combine Korean and Western classical musical traditions. German newspapers refer to Yun, above left, and a tombstone marking his grave in Berlin, lower left, also has a place for his wife, Lee Soo-ja, 84.[JoongAng Ilbo]


Every March since 2003, the coastal city of Tongyeong in South Gyeongsang has hosted the Tongyeong International Music Festival to commemorate world-renowned composer Isang Yun. The small, peaceful city that is often called the “Naples of Asia” was stirred on Nov. 3, when an international competition named after the Korean-German composer as an extension of the festival was underway. The day is when Yun died - in 1995 in Germany - and it has been celebrated for the past three years.

On one side of the city, a group of artists was holding a memorial service for the musician, who was born there and is counted as one of world’s top five modern music composers in the 1950s and 1960s.

On the other side, some 100 conservative activists staged a rally against the memorial. The demonstrators’ slogans were radical, saying that Yun “lived in luxury in return for sending the ‘daughter of Tongyeong’ and her two young daughters to North Korea,” and that Yun was a traitor. They shouted in unison that Yun was a “vicious spy and all traces of him should be removed from the city.”

Ji Man-won, a conservative critic who spearheaded the protest, said, “Given that Yun participated in anti-nationalistic activities, he should not be worshiped nor should he represent Tongyeong.”

The daughter of Tongyeong, as she is known in the local media, is the moniker of Shin Suk-ja. She is a Tongyeong native who is said to have been imprisoned at Yodok concentration camp in North Korea’s South Hamgyong Province along with her two daughters since 1987. The camp is notorious for its inhumane treatment of political prisoners. Some unconfirmed news reports say the three women were held at the camp until recently but have been relocated to a restricted area in the North’s South Pyongan Province.

Protesters claim that it was Yun who encouraged Shin and her husband Oh Kil-nam to defect to the North with their family in 1985. Oh, who earned a doctorate in economics from the University of Bremen, later escaped the North, but his family has been imprisoned there ever since.

Since Oh began an international plea on behalf his family in August, the nine-year-old Tongyeong International Music Festival has become embroiled in the ideological dispute.

Lee Yong-min, the director of the festival and one of its founders, said in a lengthy phone interview yesterday that he already feels the festival has suffered in the wake of the dispute.

Conservatives have begun exerting pressure to either cut or eliminate the budget for the event, which is co-funded by the Ministry of Culture, Sports and Tourism and the South Gyeongsang provincial and Tongyeong city governments.

“I have already been urged by the governments to remove the name ‘Isang Yun’ from the title of the competition and change the name to something like Gyeongnam [South Gyeongsang] International Music Competition if I wished to continue receiving financial support,” he said with bitterness in his voice. “But that request completely abuses a cultural asset .?.?. I am so frustrated at this moment that I feel like leaving this country.”

Much of the pressure on the festival comes from Kang Kyu-hyung, a conservative columnist and professor of modern history at Myongji University. He is one of many conservatives who have persistently contended that the festival “should not be run on money from the government.”

Earlier this month, Representative Choi Soon-ae of the ruling Grand National Party went so far as to propose that South Korea stop all events honoring Yun, including the festival, until Shin is released.

Dozens of human rights activists celebrated the launch of a 700-kilometer (430-mile) cross-country march last Thursday at Gwanghwamun Plaza in central Seoul as part of a campaign to liberate the so-called “daughter of Tongyeong” from prison in North Korea.

Yun was decades ago regarded as one of only a few internationally recognized Koreans. His musical accomplishments - in particular, his efforts to apply techniques associated with traditional Korean music through operas, symphonies, concertos, chorales and chamber pieces - have made him a cultural asset and have been crucial to modern classical music history.

But his close ties to the North still remain controversial. Some conservatives define him as a spy for North Korea, while others consider him a peace evangelist for the Korean Peninsula.

Born to a poet father in Tongyeong in 1917, Yun studied composition at the Osaka Conservatory, but after Japan entered World War II, he returned to Korea and joined the independence movement against Japanese colonial rule.

Following the armistice ceasing hostilities in the Korean War in 1953, he began teaching at Seoul National University. The following year, he traveled to Europe - Paris and West Berlin - to finish his musical studies. There, he made his debut with premieres of his “Five Pieces for Piano” and “Music for Seven Instruments,” which he had composed in 1958 and 1959, respectively. Those pieces brought him a global reputation for combining East Asian and Western classical musical traditions.

His life took a twist when he made his first visit to North Korea in 1963 to meet an old friend. He would return to the country several more times and had meetings with Kim Il Sung, the now deceased founding father of North Korea. Then, as now, South Koreans who visit North Korea without permission from the government are subject to punishment.

In June of 1967, Yun was kidnapped in West Germany by South Korea’s Central Intelligence Agency, now the National Intelligence Service, on charges of espionage, along with dozens of other South Koreans who were working and studying there. Upon his return to South Korea, Yun was sentenced to life in prison.

It wasn’t long before a global petition for his release, led by musicians such as Igor Stravinsky and Herbert von Karajan, was launched. The South Korean government eventually granted him amnesty but banished him from the country and banned him from returning. In 1971, Yun went back to West Germany and gained German citizenship the following year.

Although he was not ever allowed to return to South Korea, his German citizenship gave him the freedom to go back and forth between North Korea and Germany, and his relationship with the North grew.

The Yun Isang Music Institute, a research center, was established in Pyongyang in 1984, and a museum and an orchestra followed in his tribute.

His relationship with Kim Il Sung also deepened. Kim gave Yun a villa on the outskirts of Pyongyang as a token of their friendship, according to “My Soliloquy,” a 2001 memoir by Yun’s wife Lee Soo-ja, who is now 84. Some conservative media outlets, such as the Chosun Ilbo, reported that Yun dedicated a cantata entitled “Mein Land, Mein Volk” (“My Land, My Folk”) to Kim Il Sung for his 75th birthday.

But Lee of the Tongyeong festival has a different story. He explained that Yun composed the piece for the people of both Koreas and it was a coincidence that it premiered at Kim’s birthday event.

In the meantime, Yun continued his efforts to bring the two Koreas together, proposing that they hold a joint concert to promote cultural exchange in 1989, although the plan was never realized. In South Korea, new light was shed on his life 10 years after his death that led to the establishment of the Isang Yun Peace Foundation in 2005 during the term of liberal President Roh Moo-hyun. Yun soon emerged as an icon of peace here, too.

In appreciation of his musical contributions there, Pyongyang has held the Isang Yun Music Festival on Sept. 17, his birthday, every year since 1981. Yun’s wife and daughter, Yun-jung, 61, attended this year’s event. Then they traveled down to Tongyeong, where the daughter owns a house, in order to be present at the Isang Yun competition. Since both of them are German citizens, they can visit North Korea via Beijing.

Regarding the charges of espionage against Yun, the Truth and Reconciliation Commission of the National Intelligence Service announced in 2006 that it is true that Yun frequented North Korea and that he received and spent $5,000 from the country.

Yet it is “hard to view Yun as a spy,” the commission said, “given that Yun refused to join the Labor Party or to be trained for an underground spy ring and maintained a superficial relationship with the regime.”

Still, Oh Kil-nam insists that Yun played a critical role in bringing his family to the North and says that the act was part of Yun’s pro-North Korea activities.

Columnist Kang also argues that Yun encouraged not only Oh but other South Koreans to defect to the North.

Artist groups refute Oh’s claim and say that it has not been verified. According to Kim Hong-jong, head of an artist federation in Tongyeong, Yun said in his handwritten memoir that he did not even know that Oh had gone to North Korea.

Radical right-wing groups held a rally to demonstrate against a memorial service held for Isang Yun in Tongyeong on Nov. 3, claiming that the composer was a spy for North Korea. They say all traces of Yun should be removed from the city that is the host of the annual Tongyeong International Music Festival, held in memory of the musician. [YONHAP]


Progress in efforts to free the ‘daughters of Tongyeong’

Oh has actively worked to see his wife and daughters freed since the three were placed in the limelight in May by human rights activists and Christian groups from Tongyeong. And the effort seems to be gathering steam.

Over 100,000 Koreans here and abroad have participated in a petition drive to save the three, and since last Saturday, two dozen Koreans have been participating in a 700-kilometer (430-mile) cross-country march in support of the campaign.

Oh and North Korean human rights activists met in Seoul on Monday with Marzuki Darusman, the special UN rapporteur on the situation of human rights in North Korea, to ask the UN to send special envoys to North Korea to bring his family out of the country. A press conference with Darusman is scheduled for Friday.

The Tongyeong International Music Festival will celebrate its 10th birthday next year and its director, Lee, is determined to prepare for the anniversary - regardless of the ongoing debate.

“I think Isang Yun was like a mediator between South and North Korea,” he said. “When people disagree, there should be others to mediate. I would say Yun played that role.

“What I can say for sure is that, should Korea be reunified, Yun will definitely be recognized as a pioneer of peace.”