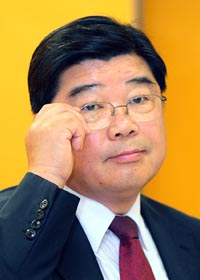 The outgoing head of the trade group representing Korea’s heavyweight commercial banks spoke out against the criticisms recently leveled at the banking sector yesterday.

Drawing a line between Wall Street investment banks and Korean commercial banks, he went on record to dismiss the charge that local banks are profiting from the snowballing household debt problem. He also called for financial regulators to keep policy making above board by issuing recommendations by document.

Shin Dong-kyu, the outgoing chairman of the Korea Federation of Banks, attempted to debunk criticism simmering against Korea’s commercial banks yesterday at a press conference marking the end of his three-year single term.

“Denouncing domestic commercial banks for being the same as Wall Street investment banks is excessive,” Shin said at the banking group’s headquarters in Myeong-dong, central Seoul.

“Some seem to view Wall Street investment banks as institutions of greed because of their excessive derivatives trading business and huge salaries, but domestic banks have overcome the financial crisis of the last few years by repeated wage freezes and cuts.”

Shin also responded to claims that local banks are profiting from the difference between high lending rates and low interest rates on deposits.

Shin will be succeeded by Bahk Byong-won, the former chairman of Woori Financial Group who also served as a Blue House senior secretary for economic affairs.