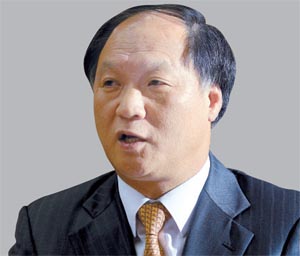 Supreme Court Justice Park Si-hwan, who retired on Sunday after six years on the bench, said he made a personal vow upon embarking on his chosen career that he would not make a “bad judgment.”

“Diversity is at the heart of the Supreme Court, because when making a decision ... all considerations of the current era need to be reflected,” Park said in a recent interview at his office at the Supreme Court in southern Seoul. “There were cases where I had to make a decision according to the law, even though it went against my personal convictions.”

Park, 59, was considered an icon among progressive legal professionals. He was born in Gimhae, South Gyeongsang, in 1953 and attended Kyunggi High School and Seoul National University, where he majored in law. He passed the bar exam in 1979 and started his career as a judge in Incheon in March 1985. In September 2003, he tendered his resignation after calling for reform of the judicature.

He returned as a Supreme Court judge two years later and is credited with contributing to the development of judicial precedents for protecting the basic rights of minority groups. He was also criticized for causing political controversies by leaning too much in favor of progressive ideas.

In an interview with the JoongAng Ilbo, Park discussed some of the hardships he has endured as a Supreme Court justice.


Q. How do you feel about leaving the post?

A. To be honest, I feel sick and tired of it after the last six years. Now I am relieved and feel like having a vacation. At the Supreme Court, I always belonged to a minority. I was often filled with sorrow and bitterness, and felt I could relate to minority groups.

Even as a Supreme Court judge, I thought how sad and unjust the less privileged, poorly educated or impoverished of our society must have felt. Unless the majority embraces them, there is no place for them to go, I thought.

How was life at the Supreme Court?

When I was appointed, I felt like I was sitting on a cushion with spikes on it, because I became a Supreme Court judge much earlier than my colleagues who passed the bar exam in the same year as myself. As a Supreme Court judge, I represented progressive and revolutionary forces, and minorities. I gave much thought on how best to do this, and how much to reflect their opinions in court trials. For six years, I felt a heavy burden but the results were ultimately disappointing. I feel sorry for those who expected a lot from me. But I was never in a position make rulings based purely on my opinion, even though it is true to say that one’s political disposition can be reflected in one’s court judgments.

How did you come to represent progressive forces?

After I passed the bar exam, I asked my high school senior Cho Young-rae, a human rights lawyer who was also undergoing legal training, what kind of judge I should become. I also asked myself the same question, and determined that the answer should be one who does not make a bad judgment.

Were there many challenges to face?

I was tested three months after being inaugurated as a judge. I started my career at a regional court in Incheon. In June 1985, I took charge of a summary trial of 14 students who took part in a demonstration. I asked whether they threw rocks out on the streets. Eleven of them denied their wrongdoing, and there was no other evidence. My verdict was not guilty. In September of the same year, I was demoted to a court in Yeongwol County, Gangwon. After the trial, I continued to put a brake on the military government’s efforts to use the law to control the antigovernment movement. Since then, I became a symbol of so-called progressive forces.

Along with four other Supreme Court justices, including Kim Ji-hyung, you have supported minority views. How did this happen?

After championing a series of controversial cases related to the National Security Law, you were criticized for being too left-leaning. What do you think about this?

What do you think of the way the Supreme Court is composed?

Unless there is diversity in the court, it cannot reflect the various opinions of society. ... In addition to senior judges, there need to be people with a variety of experiences and careers who can represent men and women, progressive and conservative groups, and majority and minority opinions. In that sense, the committee that recommends candidates also needs more diversity and greater authority.

What was it like being the first chairman of a group of progressive judges?

There have been some misunderstandings about this, which is lamentable. It actually started off in 1988 as a reading group for judges. One year after it was launched, I joined out of curiosity. During the Roh Moo-hyun administration, some judges from the group were appointed to important positions at the Supreme Court’s administrative office, due in part to their relationship with former Chief Justice Lee Yong-woo.