Korea to exercise its clout on aid at Busan meeting

Korea to exercise its clout on aid at Busan meeting 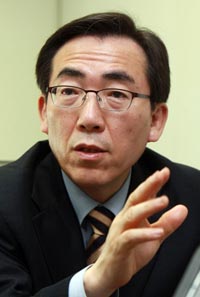 Cho Tae-yul, Seoul’s ambassador for development cooperation, said Korea has a bigger say on the global stage than many people realize when it comes to development and aid.

“You can speak with authority,” is a comment Cho frequently hears from foreigners when he speaks about development assistance and humanitarian aid at international gatherings.

A major event that will shed more light on Korea’s experience in that area will be held in the southeastern port city of Busan later this month.

In an interview with the JoongAng Ilbo last Friday, Cho said the fourth High Level Forum on Aid Effectiveness will help position Korea as a “bridge country” between advanced and developing countries on the issue of aid and development.

The Busan forum, to be held Nov. 29 to Dec.1, is expected to bring around 2,500 people from around 160 countries and 70 international organizations. UN Secretary General Ban Ki-moon and U.S. Secretary of State Hillary Clinton will attend the forum.


Q. What is the fourth High Level Forum on Aid Effectiveness in Busan? What is its agenda?

A. It is the biggest international forum in the area of development cooperation. At the forum, technical discussion about effectiveness of aid will be able to move to a discussion of what to do to make aid to countries the seeds for development. Busan is a very symbolic place to host the event. Busan was the harbor at which the aid that flooded into Korea in the 1950s and 1960s was unloaded. It is now the world’s fifth-biggest trade port - and the gateway for sending out aid Korea gives to other countries.

Many Koreans feel dubious when the government says Korea is leading the international community in setting the agenda on development.

Koreans should be proud of themselves on that matter. There are three major processes of dealing with international development cooperation. The first are the Millennium Development Goals set with 2015 as the target year. The MDGs are also a priority for UN Secretary General Ban Ki-moon after his re-election as UN chief earlier this year. The second is the Organization for Economic Cooperation and Development’s Development Assistance Committee, which Korea joined last year. The third was the development agenda of the Group of 20 summits last year, and currently Korea is a co-chair of the G-20 Development Working Group together with France and South Africa. Korea is associated with all three process.

Since the last decade, there appears to be a change in which countries are involved in the discussion over development issues. Is that so?

In the past, discussion of aid occurred at bilateral levels between the donor countries and the recipient countries. But recently, the discussion has been diversified. Emerging economies, such as China, India and Brazil, are increasing the size of their aid, and the role of private-sector entities, such as the Bill & Melinda Gates Foundation, is also on the rise. In addition to that, companies are also getting involved through corporate social responsibility programs. There needs to be a discussion of development that can encompass all parties involved. The Busan event will be the venue for it.

How are Korea’s attitudes changing toward the development issue?

Korea often kept silent when advanced countries and developing countries confronted each other over development issues. That is changing now. Korea drafted the development agenda for the G-20 Summit and has actively pursued progress on it. There is a feeling within the country that life here is still tough and why should we help others? I think that way of thinking is an obstacle to overcome. The international community does not see us as a developing country, and we want to be treated like an advanced country, but we still have a developing country mentality.

Korea is using 0.12 percent of its gross national income as international assistance. But, our target is to expand that to 0.25 percent by 2015. That will boost our aid from $1.2 billion now to $3 billion. Currently, the absolute sum is not large, but we are increasing it while many other countries are cutting theirs because of economic difficulties.