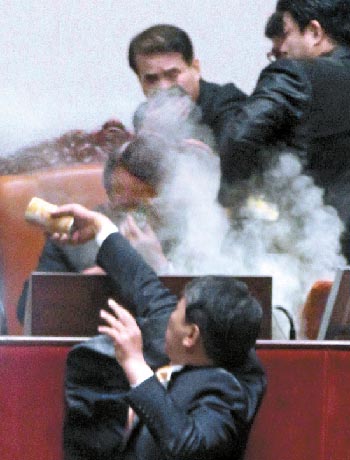 The long-stalled Korea-U.S. free trade agreement was finally ratified by the National Assembly yesterday after the ruling Grand National Party blindsided liberal opposition lawmakers with a surprise floor vote in a chaotic session complete with a tear gas attack in the main chamber.

The Grand National lawmakers made an unannounced entrance into the main chamber in the afternoon, startling the opposition Democratic and Democratic Labor parties, who expected the ruling party to railroad through the FTA in a plenary session scheduled for tomorrow.

After an opposition lawmaker sprayed tear gas at the speaker’s podium, and to bellows of complaint from other opposition representatives, the GNP held a floor vote at 4:32 p.m. and approved the pact to lift trade and investment barriers between Korea and the United States. Of the 170 lawmakers who participated, 151 voted for ratification, and seven voted against it. Twelve lawmakers abstained. The remaining 125, largely from liberal opposition parties, refused to participate in the floor vote.

The FTA, concluded in 2007 and renegotiated with Washington late last year, is expected to take effect on Jan. 1. The U.S. Congress approved the pact last month.

The Blue House yesterday welcomed the news. “It’s fortunate that the FTA is ratified, although the process was difficult,” said Choe Geum-nak, the Blue House senior public affairs secretary. “We thank the people for giving unconditional support for the FTA. We also thank the lawmakers who have worked hard for the ratification.”

After the ratification, liberal opposition parties said they would not cooperate on any further legislative activities, including the deliberations on next year’s budget. They also vowed to lead anti-FTA protests in the streets in alliance with civic groups.

After the GNP lawmakers started gathering for the surprise vote, DP and DLP lawmakers rushed to the main chamber to stop them. As he entered the room, DP Chairman Sohn Hak-kyu said, “The GNP and the Lee Myung-bak administration must not turn blind eyes to the people’s will and forcibly railroad this bill.”

Before the floor vote could take place, the main chamber briefly fell into chaos after DLP Representative Kim Sun-dong opened a tear gas canister on the floor and shook it at the speaker’s podium, forcing Vice Speaker Chung Ui-hwa, a Grand National, to vacate the seat. The tear gas attack was a first for Korean politics.

(Earlier in the day, Assembly Speaker Park Hee-tae gave his authority to arrange a floor vote to Chung, with a request to complete the review of the ratification bill by 4 p.m.)

The tear gas attack failed to stop the ruling party. Security guards forcibly removed the fiercely resisting Kim from the chamber and Chung declared the opening of the plenary session around 4:24 p.m.

Two minutes later, Chung asked the lawmakers if they agreed with holding the floor vote on the ratification bill in a closed session. Of the 167 lawmakers who participated in the voting, 154 agreed.

It was widely expected that the GNP would eventually use its majority - 169 lawmakers inside the 295-member legislature - to hold a floor vote and approve the FTA, but the timing was not clear until the last moment. The ratification required the majority of the National Assembly, or at least 148 lawmakers, to participate in the floor vote and a majority to approve it.

A last-ditch effort to reach a compromise between the ruling and opposition parties fell through around 11 a.m. yesterday. One hour later, Representative Hwang Woo-yea, the GNP floor leader, asked National Assembly Speaker Park to introduce the ratification bill for a floor vote.

The GNP began a lawmakers’ caucus at 2 p.m. to discuss next year’s budget. One hour into the meeting, GNP Chairman Hong Joon-pyo announced that the ruling party would vote on the ratification bill that day. The lawmakers got up and moved quickly to the main chamber across the hallway.

Representative Lee Myong-gyu, deputy floor leader of the GNP, led the march of about 130 lawmakers. The GNP members entered the main chamber around 3:07 p.m. The minority conservative Liberty Forward Party also joined the session around 3:52 p.m.

Following the approval of the FTA, the National Assembly also passed 14 other bills to revise Korea’s laws to implement the FTA.

“The government will reflect the National Assembly’s recommendations to improve measures to protect our farmers and small businesses made during the legislature’s discussion,” the Blue House’s Choe said. “We will also come up with further follow-up measures to improve their competitiveness. Considering the forecast of a global economic crisis next year, we will also put in our best efforts so that the FTA will help the Korean economy’s revitalization and increase jobs for young people.”

Despite the opposition parties’ persistent demand that a provision on investor-state dispute settlements be removed from the bill, the clause remained.

Lee visited the National Assembly on Nov. 15 and promised to start a renegotiation of the contentious provision with Washington after the legislature ratified the FTA.

Asked if Lee will keep the promise, Choe said yesterday that the president will live up to his word if the National Assembly makes a recommendation.