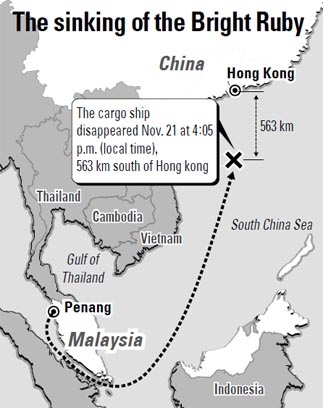 A South Korean cargo ship sank Monday in mysterious circumstances in the South China Sea, and 14 crew members were saved. Seven of the crew are still missing, including three Koreans and four Burmese.

The Bright Ruby was sailing from Malaysia to mainland China when it sank around 560 nautical miles south of Hong Kong around 4:05 p.m. local time Monday. Twenty-one crew members, including nine South Koreans, were on board the 15,000-ton ship carrying iron ore and grains.

The Bright Ruby was hijacked off the Gulf of Aden in Sept. 2008 by Somali pirates and held for 37 days.

Around 3 p.m. Monday, the Bright Ruby sent a distress call to the National Maritime Police Agency, which immediately contacted Hong Kong and Vietnamese rescue and search centers for help. 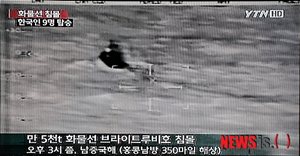 The cause of the sinking is not known.

Hong Kong and Vietnamese rescue workers have been searching for the missing crew members, and the Hong Kong police mobilized helicopters.

None of the current Korean crew was on the ship during the 2008 hijacking.