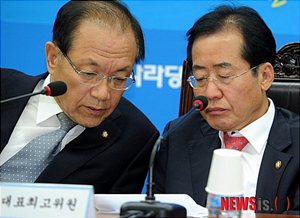 The leader of the ruling Grand National Party yesterday backed a plan to introduce higher taxes on the superwealthy, part of a continuing effort to change the party’s image of being pro-rich.

“It’s wrong to levy the same amount of tax on someone who earns 88 million won [$76,824] and someone who earns 10 billion won,” Grand National Party Chairman Hong Joon-pyo said yesterday after a lecture hosted by the Hansun Foundation for Freedom and Happiness in central Seoul.

“When junior lawmakers of the GNP attempted to introduce a so-called Buffett Tax and create a new segment at the top of the income tax structure to make the rich pay more taxes, there was significant resistance,” Hong said.

The conservative ruling party has tried to redefine its image to attract younger, working-class voters ahead of next year’s legislative and presidential elections and after its crushing loss in October’s Seoul mayoral by-election to liberal independent candidate Park Won-soon.

One of the ideas presented by reform-minded lawmakers including Representative Chung Doo-un was a new tax named after American billionaire investor Warren Buffett. Earlier this year, Buffett raised the notion of raising taxes on the wealthy, including himself, noting that they pay a lower percentage of their income in taxes than average people.

GNP reformist Representative Kim Sung-sik said a tax of up to 40 percent should be levied on the highest incomes.

“The current income tax law was established about 28 years ago,” Hong said yesterday. “In the highest income bloc, the tax is the same for those who earn 88 million won and those who earn 10 billion won.

“The privileged and the haves of our society should not think they are being deprived of what they have earned,” Hong said. “I would hope they live with a belief that they are making contributions to society.”

Hong’s remarks were the most dramatic attempt of the GNP’s proposals to pump up its unpopularity among the working class. In September, the ruling party joined the liberal opposition to pressure the Lee Myung-bak administration, known for its pro-business policies, to scrap a planned tax cut for large companies and high-income earners.

The government had been pushing tax cuts on the wealthy, saying that with more capital to invest, large conglomerates could ramp up their operations and end up paying more tax, even at lower tax rates.

Hong also said yesterday the GNP will reveal more efforts to reform itself, and also recruit new blood into the party. “After the ratification of the [Korea-U.S.] Free Trade Agreement and the budget passage, we will spend about a month to overhaul the party,” he said.