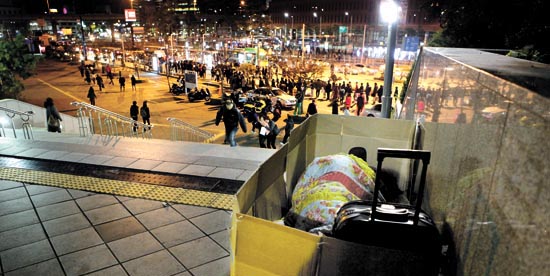 A homeless person tries to sleep on the stairs of Seoul Station on Monday, fending off the cold with boxes and blankets. By Kim Tae-seong


Three months after being run out of Seoul Station, about 300 homeless people are looking for new spots to survive the winter, spreading into nearby subway stations in central Seoul.

The Seoul Metropolitan Government said the number of homeless around Seoul Station decreased about 20 percent after the Korea Railroad Corporation evicted them in August. It presumed that shelters and welfare facilities absorbed them.

In fact, a reporter from the JoongAng Ilbo found many of the evicted homeless in subway stations. And now the subway stations have the same headache that led to the evictions from Seoul Station, in particular the danger of the homeless freezing to death when the temperature drops.

At 11:00 p.m. Sunday, a 55-year-old homeless man surnamed Sang, who lived in Seoul Station for six years before being evicted last summer, headed to an underground passage leading to Seoul Station’s subway station. He secures a spot for himself, lays cardboard boxes on the ground and wraps a blanket around his body.

“When the sun sets, the homeless people rush into nearby subway station passages to find their spots for the night,” Sang said “I know there are shelters but it’s not a popular option for us because the facilities aren’t large enough for all of us and there are so many thieves.”

In the underground passage, about 60 homeless were shivering with cold. After 1:30 a.m., they were joined by about 40 more.

Dozens of elderly homeless who failed to secure spots near the Seoul Station subway gather in other subway stations’ underground passages, including Euljiro, City Hall and Chungjeongno Stations. “When the weather is too cold, I go to a restroom inside one of the subway stations so I can use a hand dryer,” a 61-year-old homeless man said. “Many people prefer to spend their daytime hours around Seoul Station and get through the nights at subway stations.

“Since the eviction from Seoul Station, we’ve found many boxes and soju bottles on the ground and in stairways when we open up the station every morning,” an official at City Hall Station said. “We’re worried that drunk people using the subway may provoke confrontations with homeless people. Or vice versa.”

Several civic groups including the Homeless Action Association demanded Seoul’s government to come up with some solutions to the homeless problem. “They need more shelters in better condition,” Lee Dong-hyeon, a civic group member said. “The government should remember there are still more than 200 homeless people sleeping outside.”