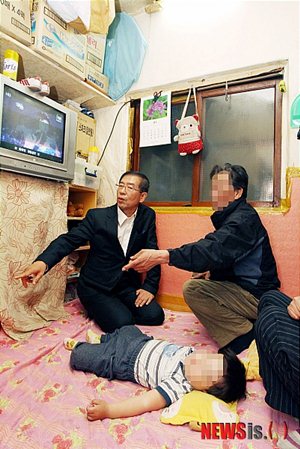 As part of his expansion of welfare benefits for Seoul, Mayor Park Won-soon yesterday unveiled a project to help people who are poor but not eligible for the government’s basic subsidies get through the winter.

Saying he won’t let anyone go hungry or sleep on a cold floor, the mayor launched the Ondol for Hope project. Ondol is the below-floor Korean heating system.

“The ultimate goal of the Ondol for Hope project is to build up a self-governance system in local communities via networking with the city government,” Lee Jeong-gwan, chief at the Welfare Policy Division of the city, said at a briefing yesterday. “Focusing the city government officials’ efforts on the project in the short term, we hope local communities can solve their welfare problems by themselves in the future.”

A group of civil servants and citizens will hunt out poor people in need of assistance and raise donations to help them.

A special committee of 19 members - not led by experts or professors, but by local residents and civil activists - was formed. The committee had its first meeting recently to build the framework of the project.

“We expanded the previous budget for helping poor people prepare for the winter to 3 billion won [$2.6 million] for this year,” Kim Seong-ryong, a city government official told the Korea JoongAng Daily yesterday. “The mayor told us there are many lesser known civic groups and volunteer organizations in the city and asked us to figure out how to make them self-governance organizations in the city.”

The city government said it is launching a Web site on which residents can report where disadvantaged people are via Twitter.

The city will also launch a Wagon for Hope program in which 26 buses with daily necessities will visit poor regions in the city from Nov. 30 to March 15.

In December, Park will personally visit disadvantaged people identified in the program to see if they have been helped, especially during the Christmas holiday.