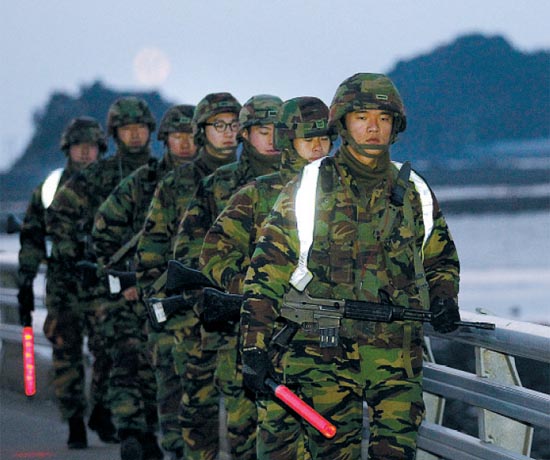 Marines patrol a coastal road on Yeonpyeong Island yesterday, a day before the first anniversary of North Korea’s shelling of the island on Nov. 23, 2010. [YONHAP]


Yeonpyeong Island - Kim Jeong-su thought there was something wrong with his ears. He seemed to hear the stomping of dinosaurs. 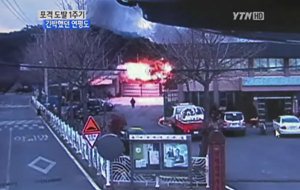 As the deafening sounds got louder, and therefore closer, the leader of the Seventh Artillery Squadron of the Marine’s Yeonpyeong Unit stepped out of his command and control room. On the horizon, Kim saw a rain of shells starting to envelop the island and pillars of smoke rising to the sky.

“I evacuated my men to a safer position and we hit back with K-9 self-propelled howitzers,” Kim said, recalling the surprise attack from North Korea on Nov. 23, 2010.

Last week, JoongAng Ilbo reporters visited the island in advance of today’s one-year anniversary of the attack, and found that many parts - and the hearts of its people - remain bruised.

The shelling, the first North Korean attack on South Korean territory since the end of the Korean War, killed two civilians and two marines of the Yeonpyeong Unit, Sergeant Seo Jeong-woo and Private Moon Gwang-wook.

Around 170 rounds of shells were fired at the island. A mountain towering over the base of the unit, hit hard by the shelling, shows its scars.

Some of the artillery of the Seventh Squadron were shelled and hit by shrapnel.

A barber shop at the base still had a 1.5-meter diameter hole in its ceiling. The shop has been converted into a memorial to the destruction of the day. Kim was transferred to the headquarters of the Marine Corps in January, but he accompanied the reporters on the trip to meet some of his former comrades.

Among the 96 members of his squadron, only around 15 people were left on Yeonpyeong. (The others were transferred or discharged.) Sin Sang-mun, 21, one of the lower-ranking soldiers in the squadron a year ago, was now a senior. Sin welcomed Kim and the two men hugged.

The battle that day was cruel, Kim said, but it united the soldiers more than ever.

“‘You attack us once more and we’ll show what the cost will be.’ That’s what we think about here every day since last year,” said Do Gi-baek, a sergeant.

“Even if I am discharged and heading for the mainland,” he said, “if North Korea attempts another attack, I will return and fire back.”

Eight marines were injured during the shelling and were sent to a military facility on the mainland. They were offered to be relocated to any unit they wanted but five decided to return to Yeonpyeong. Lee Han, one of the five, suffered an injury to his thigh.

“I don’t think I was injured because I became a marine,” said Lee. “I think I survived because I am a marine. I got this life as a gift and now I can do anything I want.”

For the island’s residents, time appears to have been a healer. The number of residents increased from 1,750 in November last year to 1,898 as of last Thursday.

A year ago, there was no around-the-clock convenience store on the island. Now there are two. The number of visitors to the island between January and October rose 27 percent from a year ago to 29,000.

But psychological wounds have been slow to heal. Resident Kim Jeong-hi, 47, said any news indicating unusual activity in North Korea triggers the memories of a year ago.

“Anytime a village official turns up, children get frightened and ask whether we’re being evacuated again,” said a 35-year-old teacher who runs a private school on the island. Schools on the island have asked for medical counselors from the Incheon Metropolitan City Office of Education for students suffering from post-traumatic stress.

North Korea still claims that the shelling was an act of self-defense following “provocative” military drills on the island by the South. North Korea’s official propaganda Web site, Uriminzokkiri, yesterday complained that the South is fortifying its forces on the island “to make another military provocation like the Yeonpyeong incident.”

To deter additional attacks, the South’s Joint Chiefs of Staff said yesterday it will conduct exercises today including one that simulates an attack on Yeonpyeong and other borderline islands.