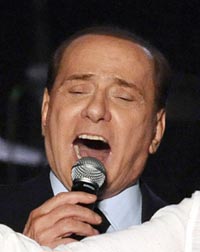 ROME - Silvio Berlusconi is reviving his musical career, just a week out of office.

It’s too early to say how sales are going. A tourist from Florence, Maria Grazia Merilli said she is certain that Berlusconi has “great experience” to write good love songs, but she still wouldn’t buy it.

Berlusconi resigned Nov. 12 after failing to come up with economic reforms that could persuade markets and European partners that Italy could escape the continent’s debt crisis.

The twice-married ex-premier has often boasted of his prowess with women. Parties at his residences attended by attractive young women have landed in him trouble with prosecutors, who have charged him with allegedly having paid for sex with an underage Moroccan teen and using his influence to cover it up. Berlusconi denies the charge.