Bayern, Inter, Benfica progress to the next stage

Bayern, Inter, Benfica progress to the next stage 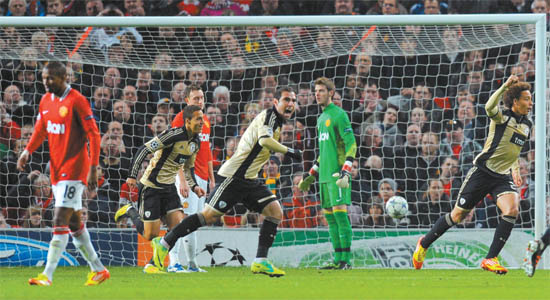 
LONDON - A finalist in three of the last four years, Manchester United is struggling to even get out of its group in this season’s Champions League.

Barcelona, Real Madrid and AC Milan were joined on Tuesday by two more of Europe’s football elite, Bayern Munich and Inter Milan, in the knockout stage of the game’s biggest club competition.

There is still one glaring omission from this list of the world’s biggest clubs however - the English champions.

United was held to a 2-2 home draw by Benfica on Tuesday, leaving its hopes of qualifying from arguably the easiest of the competition’s eight groups hanging in the balance.

England defender Phil Jones turned the ball into his own net to gift the visitors a third-minute lead and goalkeeper David de Gea failed to clear his lines properly in the 60th, allowing Pablo Aimar to make it 2-2 barely 60 seconds after Darren Fletcher had put United ahead for the first time.

Dimitar Berbatov - with his first goal in Europe in three years - had earlier equalized in the 30th.

“The goals were a bit freakish - an own goal and then bad kick out by David de Gea,’’ United manager Alex Ferguson said. “It’s a cruel game at times.

At least a draw is needed at Swiss champion Basel next month if United is to avoid becoming the biggest casualty of the group stage.

Benfica’s point at Old Trafford ensured the Portuguese side, two-time European champion in the 1960s, also qualified for the competition’s last 16, increasing the misery for United at Old Trafford.

It was a bad night, too, for United’s rival Manchester City.

Blazing a trail at the top of the Premier League, the destiny of Roberto Mancini’s side is out of its hands in its first season in the Champions League after losing 2-1 at Napoli.

A brace of goals by Uruguay striker Edinson Cavani left Napoli a point ahead of City in Group A, knowing a victory at already-eliminated Villarreal will ensure the Italian side finishes second behind Bayern.

The German team, which will host the final at its Allianz Arena stadium next May, beat Villarreal 3-1 to guarantee top spot in the group with France winger Franck Ribery scoring two of the goals. Inter, the 2010 champion, qualified Tuesday before a ball was kicked in its match at Trabzonspor, courtesy of Lille’s earlier 2-0 win at CSKA Moscow in Group B. The Italians secured first place, however, by drawing 1-1 in Turkey.