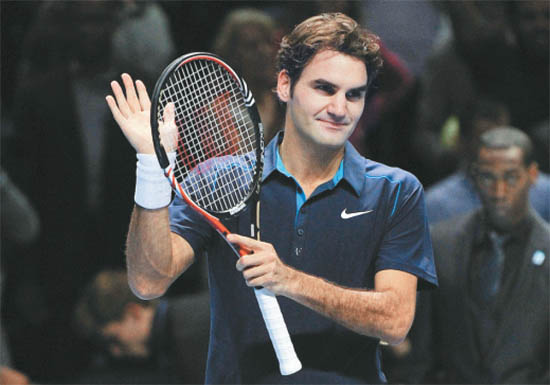 Roger Federer of Switzerland reacts after winning against Rafael Nadal of Spain at the ATP World Tour Finals at the O2 Arena in London, Tuesday. Federer extended his winning streak to 14 matches. [REUTERS/YONHAP]


LONDON - No tears, no drama, no contest. The 26th episode of Roger Federer and Rafael Nadal’s compelling rivalry turned out to be one of their most one-sided.

Federer took exactly 1 hour to win 6-3, 6-0 and qualify for the semifinals of the ATP World Tour Finals on Tuesday in his most comprehensive victory over the Spaniard.

Pinned behind the baseline, Nadal found Federer’s forehand unplayable. From 2-2 in the first set, Federer won 10 of the next 11 games. He finished with 28 winners to Nadal’s four.

“It was a great match for me basically from start to finish,’’ said Federer, who broke down in tears after losing to Nadal in the 2009 Australian Open final but had no issues on Tuesday at the O2 Arena. “I was able to do what I was hoping to do: dominate from the baseline, play close to the baseline, serve well, take his time away.’’

The winner of Thursday’s match between Tsonga and Nadal will claim the other semifinal place from Group B.

Nadal still leads the head-to-head series against Federer 17-9, but Tuesday’s win extended the Swiss player’s dominance indoors, where he has won all four of their matches.

Nadal, who had an upset stomach during his three-set win over Fish on Sunday, said he had been unable to practice on Monday because of a shoulder problem that he thought might end his tournament but he said he was in “perfect’’ condition against Federer.

“Today he played too good for me, and that’s what happened,’’ Nadal said. “Just accept that.’’

“Sometimes it just derails for you, like it derailed for Rafa today and it did for me at the French Open,’’ Federer said. He will play Fish in his final group match on Thursday.