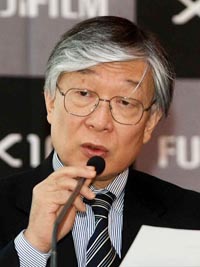 Kodak, the U.S. imaging and photographic equipment maker, ruled the film business for nearly a century, but its losses have been mounting at the same time as retirements, layoffs and downsizing have become common trends in recent years.

Given that some other camera makers have already adopted a high-end strategy, and amid a growing concern that Fujifilm could follow Kodak’s footsteps in terms of its decline, the Korea JoongAng Daily sat down with Matsumoto to hear his views.

He acknowledged such concerns but expressed confidence that Fujifilm is “one of two to three companies in the world that knows how to make ‘real cameras.’ ” Fujifilm is a 77-year-old photographic and imaging company, but in spite of its longevity, it remains an unfamiliar brand for most Koreans in terms of cameras compared with other Japanese companies like Canon, Nikon and Panasonic.


Q. Does Fujifilm have strong prospects in the camera business?

A. About two years ago, executives at Fujifilm debated the reasons for our low share of the camera market and discussed whether we should even continue our camera business. But we all agreed that we are just as good as Canon and Nikon in terms of technology. That is why we decided to gamble on the camera business.

[Fujifilm was the No. 2 camera maker after Canon in Japan between January and October of this year.]

Fujifilm is not only competing with traditional camera makers but also with companies like Samsung Electronics. In the TV market, Sony was dethroned by Samsung in 2006. Do you think something similar could happen in the camera market?

When you watch TV, you don’t really scrutinize all corners of the screen. You watch it from a certain distance. But this is not the case with cameras. To determine their resolution, you examine all parts of the screen. That is because, unlike photography, TV watching is not a hobby.

Also, when talking about TVs, do people really care about the frame or body? But for cameras, consumers care very much about the buttons, the dial, the body - whether it’s smooth or rough, whether it’s made of cheap material or magnesium. Again, this is because cameras are for hobbyists. The reason Samsung was able to overtake Sony in TVs was because of cost competitiveness. And cost competitiveness works in TVs because people aren’t as focused on issues such as resolution, frame and body.

Samsung entered the camera market late, but it is expanding its presence. Still, it’s only in low- and mid-end cameras, but this kind of trend cannot easily happen in the market for high-end cameras.

Tell us why Korean consumers should choose a Fujifilm camera.

There are three technologies needed to make a true camera: a lens, a sensor and a large-scale integration chip [which serves as a bridge between the former two]. There are only two or three companies in the world that have the perfect technological capabilities for putting together all three, and we are one of them.