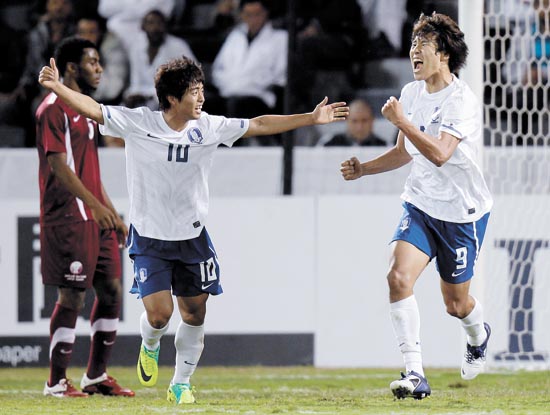 Korea’s Kim Hyun-sung, right, celebrates with Baek Sung-dong after scoring a goal against Qatar during their Asian qualifiers for the 2012 London Olympic Games at the Al-Sadd Stadium in Doha, Wednesday. [REUTERS/YONHAP]


A header from Kim Hyun-sung saved the Korean Olympic football team from defeat against Qatar on Wednesday, keeping them in the top position in Group A of the Asian qualifiers for the 2012 London Olympics.

At the Al-Sadd Stadium in Doha, Qatar, Korea played offensively from the first half with Kim and Baek Sung-dong up front, but handed the opening goal to Qatar midfielder Ibrahim Majid Abdulmajid, who converted a penalty in the 43rd minute after Park Jong-woo committed a foul inside the penalty box.

In the second half, Korea used senior team members such as midfielder Yoon Bitgaram and winger Seo Jung-jin to empower their attack. Finally in the 67th minute, Korea delivered an equalizer.

After Yoon’s shot was blocked by a defender, left back Yun Suk-young delivered a cross from the left flank with his right foot and Kim headed the ball into the right corner of net, past Qatar goalkeeper Ahmed Sofyan Abonora.

Kim could have delivered a game-winning goal in the 88th, but he misfired the cross from the right flank and the match ended as a 1-1 draw.

Korea is now leading Group A with four points, on a win and a tie. The Under-23 team beat Oman 2-0 at home in September. Oman is in second place with three points, followed by Qatar with two and winless Saudi Arabia with one.

“It was a difficult match since we surrendered the unexpected penalty, but our players didn’t give up until the last moment,” Korea Olympic coach Hong Myung-bo said at the post-match news conference. “The result is satisfactory, as we collected one point in an away game.”

Hong said their savior Kim played better than expected despite the player having little experience with the Olympic team.

“I thought he would only play a maximum of 60 minutes since he started training with the team three days before the match because of a thigh injury,” Hong said. “But in a difficult situation, he played a great role by scoring an equalizer.”

Kim, 22, was playing his first match as a starter since joining Hong’s team in August. The Daegu FC striker, who is currently on loan from FC Seoul, has previously played only six minutes for the Olympic team against Oman in September, replacing Bae Chun-suk late in the second half.

But since Bae and other fellow Europe-based strikers such as Sunderland’s Ji Dong-won and Hamburg’s Son Heung-min were ruled out of the match due to their club situations, Kim took his chance.

“I had a feeling when I headed the ball,” Kim said to Yonhap News Agency after the match. “It was tough for me since I didn’t have enough time for training, but I did my best to get a win.”

Kim, who marked seven goals and two assists in this season’s Korea Professional Football League (K-League) after scoring only one goal last season, said he hopes to get another chance in the next match against Saudi Arabia.

“If I have a chance to play against Saudi Arabia, I want to score a goal early so that our team can play comfortably throughout the game.”

Korea faces Saudi Arabia at Seoul World Cup Stadium on Sunday. The Olympic team took a flight to its homeland right after the match and arrived in Korea yesterday. Interestingly, the team boarded the same plane as the Saudi Arabian squad.

But with little time to spare, Hong’s team went straight to the National Football Center in Paju, Gyeonggi, to prepare for their upcoming qualifier.

Football pundits said that although the team showed a solid performance against Qatar, overall the Olympic team’s attack should be more organized and accurate. In a match against Qatar, the team shot 12 times, but only three of the shots were on target. Korea also had 15 crosses, compared to Qatar’s five crosses, but failed to take advantage until Kim scored in the second half.

Hong said that he hasn’t yet decided on their tactics to face the Middle East team, but will make a decision depending on his players’ condition.