Breaking a taboo, first major film about the L-word opens in Korea

Breaking a taboo, first major film about the L-word opens in Korea 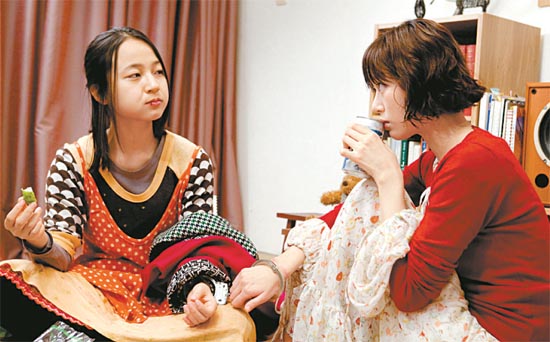 In a series of flashbacks, Yoon Ji-woo (Kim Hyo-jin), right, recounts how she met and fell in love with her old girlfriend, Gang Ji-woo (Kim Kkot-bi), in “Life is Peachy,” which is set to open Dec. 8. Provided by Lotte Entertainment


There have been many boy-meets-girl or boy-meets-boy love stories in mainstream cinema in Korea, but none about lesbians.

So when director Kim Su-hyeon’s “Life is Peachy” was screened for the press on Nov. 16, it certainly attracted attention.

The film revolves around three lesbians and their intertwining relationships, with steamy sex scenes to boot.

Kim, who also wrote the screenplay, said he wrote the film out of what he later recognized as a misconception of same-sex relationships.

“I believed their love would be different and special, which is what made me write the story,” Kim told the media. “But as I developed the story, I realized I was wrong. Their love is the same as everyone else’s, so I changed my mind and tried to look at their love from the same perspective as I would for heterosexual couples.”

He was open about the challenges of making a film about two women, and didn’t deny that it was difficult.

“If the lead characters had been male and female, it would have been much easier for me to direct the film, though,” he said.

“Life is Peachy” is Kim’s second film. His first, 2004’s “So Cute,” also contained an unconventional love story. That film was about a father and three sons who compete with each other to win the affections of one woman. With the film, Kim was named best new director at the 41th Paeksang Arts Awards in 2005.

“Life is Peachy” revolves around three women named Ji-woo. Arts professor Jung Ji-woo (Kim Sang-hyun) is searching for a nude model for a video clip that will be played at her exhibition. When Hee-jin (Seo Hyun-jin), one of her students, recommends Yoon Ji-woo (Kim Hyo-jin) for the job, the three woman head to the beach to shoot the video. As they spend time together, Yoon Ji-woo begins to share pieces of her past relationship with Gang Ji-woo (Kim Kkot-bi). The film weaves the pasts and presents of the three Ji-woos and focuses on their intersecting relationship.

Shot two years ago in the middle of winter, with some very steamy sex scenes, the roles couldn’t have been easy for the young actresses to take on. Korea is still a conservative society when it comes to nudity and sex, and homosexuality is still a taboo topic here, especially where love between women is concerned. And most actresses decline to appear nude on screen in order to protect their image.

But the two leads, Kim Hyo-jin (“Five Senses of Eros,” 2009) and Kim Kkot-bi (“Breathless,” 2008), both said that portraying lesbians was not a problem and that they were happy to be part of the film.

“The most challenging thing during the production was the brutal chill,” Hyo-jin said. “But playing the role of a woman who falls in love with someone of the same sex wasn’t that difficult.

“I approached the film in this way: Two people meet and fall in love. And the person that I fall in love with happens to be a woman.”

Kkot-bi agreed and said she hoped the film would help promote understanding of homosexuality.

“I don’t see their love as anything special. The way they feel and the way they are attracted to each other is the same as for everyone else,” Kkot-bi said. “I hope this film will help people understand gay people better.”

Kim said that he was surprised that his film had been invited to the Berlin festival, where there is a larger variety of films about homosexuality.

He said that at first he thought the film had been invited simply because of the novelty of a film about lesbians from Korea, but later changed his mind.

“I had the impression that they were more interested in the characters’ emotions and the way they communicate with each other,” Kim said. “Maybe that’s because of the cultural differences [between Korea and Germany].”

The film is one of a growing number of films depicting same-sex relationships. “REC,” directed by So Jun-moon, opened yesterday. It traces two men, who have been together for five years and are on the verge of breaking up, on their last day together.

More films will be released next year. Producer Kim Cho Gwang-su, who participated in the production of hit films “Detective K” (2011) and “The Client” (2011), is currently working on “Two Marriages and One Funeral” and So who directed “REC” is also working on a film about the queer community, “Road to Itaewon.”