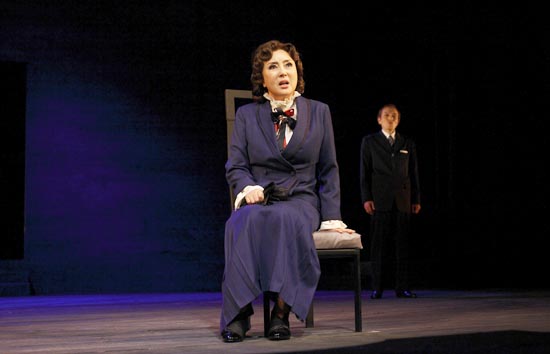 
American writer William Faulkner’s book “Requiem for a Nun,” which was dramatized for the theater by French author Albert Camus, is returning to the Korean theater scene for the first time in more than 30 years. The work by two Nobel Prize laureates in literature comes back with the same shocking title it had when it premiered in Korea in 1969: “Confession of a Black Prostitute.” Considering a nun never appears in the play, Korean director Kim Jeong-ok, 80, who also produced the work more than three decades ago, thought this more provocative title was more fitting.

“It looks like the original writers thought of the female characters in the story as nuns in some way, but I gave a bit different Korean title because I thought renaming the work was important to attract a larger audience,” said Kim at the press call yesterday at the Daehangno Arts Theater main hall in Hyehwa, northeastern Seoul. It is Kim’s 100th theater piece as director and the 50th anniversary of his debut as a theater director.

The original book “Requiem for a Nun” (1951) is a sequel to Faulkner’s most sensational novel, “Sanctuary” (1931). The main female character, Temple Drake, a lawyer from a judge’s family in Mississippi, has a twisted past with her husband Gowan Stevens. In “Sanctuary,” she and then-alcohol-addicted Gowan were taken to a remote house by bootleggers in Memphis, Tennessee, where Temple was raped and also witnessed a murder.

Trying to leave their past behind them, the couple has a daughter and hires a black nanny named Nancy. But as Temple’s past catches up with her, the infant daughter is murdered by the nanny. Temple, in an attempt to hide her dark past, decides to defend Nancy in court. While she struggles for atonement, she later confesses her past to the judge to explain the murder of her own daughter. The play deals with themes of human conscience and guilt and reveals that humans sometimes neglect ethics or justice for peace of mind.

“Our society needs more people to confess their guilt,” said Kim. “The play was written to deliver some eternal values, and I’m going to make the values of the play more approachable to the younger generation this time to make a better society.”

However, the casting seems to contradict his statement. Another interesting element in the play is that 61-year-old actress Kim Seong-nyeo will be playing Temple, who is in her 30s in the story.

“Young actors might look attractive and make the character interesting, but they won’t be able to present maturity and taste. And I believe Kim will bring that to the stage,” said Kim.