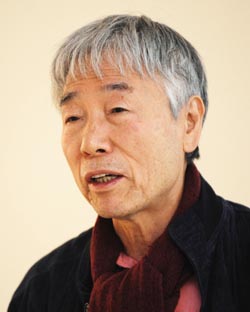 Lee Ufan, 75, has returned from his retrospective at the Solomon R. Guggenheim Museum in New York to open his solo show “Dialogue” at Gallery Hyundai in Sagan-dong, central Seoul. Lee was the third Asian artist to have his work exhibited at the Guggenheim, following Paik Nam-june (2000) and Cai Guo-Qiang (2008).

Through his work, Lee explores the relationship between things in their natural state, aiming for moderation and coexistence. In this exhibition, he presents 10 new pieces that are bold yet concise and controlled.

“This exhibition will present works that cannot be simpler or more controlled than they are now,” the Japanese-based Korean artist said at a press event last week.

Asked about the exhibition at the Guggenheim, he said he put a great deal of thought into its preparation.

“For an artist, it is an honor and a pleasure to reflect on one’s life and reorganize the past,” he said. “I was filled with both fear and anxiety about how Americans would see my work, but am satisfied with the result.”

Lee said he was especially pleased that critics did not judge his works as “Korean” or “Asian” but on their own merits as artistic creations.

“If Western people focused on such things, it would be like saying, ‘Your works look good but I have no interest in them,’?” he said. “I don’t want my work to be exotic or held up as representative of Korean art. But that doesn’t mean I don’t want it to be Korean.

“It’s just that I prefer my work to be universal, something that audiences anywhere can easily relate to.” 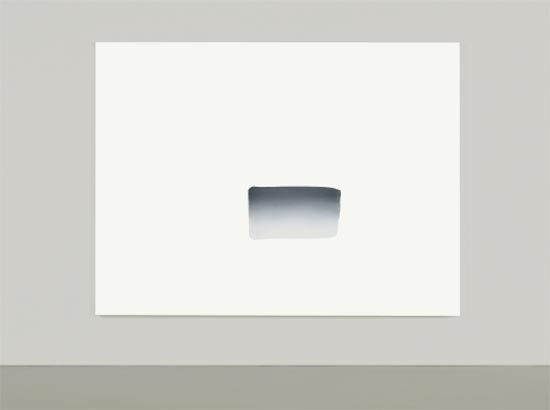 Lee Ufan’s “Dialogue” (2011), oil and mineral pigment on canvas, from the exhibtion of the same name, continues until Dec. 18 at Gallery Hyundai in central Seoul. Provided by Gallery Hyundai


With this exhibition, Lee said he was aiming to find a connection between his inner self and external stimuli, between the known and unknown, through dialogue.

Most of the paintings on display consist of one dot on a white field. The negative space holds a crucial meaning, he said. It isn’t mere emptiness.

He also described how the emptiness in his art is different from that in other Eastern art. The positive space (the dot) resonates out across the blank canvas, walls and atmosphere, and Lee wants viewers to feel the vibrations.

Although Lee also creates sculptures and installations, he said that painting still holds a special meaning for him, in that a painting embodies an artist’s thoughts.

“The act of painting, the corporeality of the paint, and the spirituality that comes from the profundity of the thoughts held by the artist should all be present in art,” he said. “There is nothing better than painting to express my ideas. It is as if my body becomes the medium for a dialogue between myself and the canvas.”

Lee said that, for him, there is no substitute for drawing and it is something he must do alone, though this process presents its own challenges.

“At times it takes from morning to sunset for me to mark a dot, and it easily takes 40 to 50 days to finish one piece,” Lee said. “Stable breathing is an important factor in my art. Irregular breathing leads to distorted art, and for this reason it is important for me to be able to embrace myself. But that is a task that’s getting harder. There is a chance that my works will slowly grow smaller in size.”

He also said that though he wants his works to endure, he knows that art fades with the passage of time.

“I simply want to be remembered as someone who provided some insight into the concept of ‘art,’?” he said.