Scorsese and ‘Hugo’ team up to celebrate movie making

Scorsese and ‘Hugo’ team up to celebrate movie making 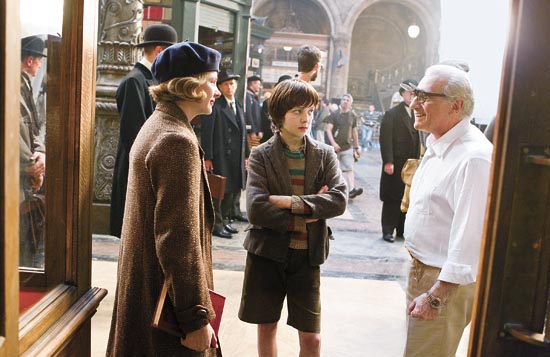 In this image released by Paramount Pictures, actors Emily Mortimer, left, and Asa Butterfield listen to director Martin Scorsese on the set of “Hugo.” [AP]


NEW YORK - French film pioneer Georges Melies directed over 500 movies at the turn of the 20th century, but few of them survived.

Melies was forced to melt down many of his films to sell the chemical residue for the manufacture of footwear. After World War I he wound up a broken and bitter purveyor of toys at Paris’ Montparnasse train station.

Martin Scorsese, director of classics like “Taxi Driver” and “Raging Bull,” had never undertaken a family film before. But Brian Selznick’s bestselling novel, “The Invention of Hugo Cabret,” with its focus on early cinema, was a perfect fit for the Oscar-winning director who is passionate about film preservation.

“There was an immediate connection to the story of the boy, his loneliness, his association with the cinema, with the machinery of creativity,” Scorsese said of the film. “Everything done in film today began with Georges Melies. And when I go back and look at his original films, I feel moved and inspired because they are among the first, powerful expressions of an art form that I’ve loved and to which I’ve devoted the better part of my life.”

“Hugo,” which opened Wednesday, is the name of an orphan (Asa Butterfield) living in Montparnasse train station in Paris in 1931. A chance encounter with Melies leads to a friendship with his adopted daughter, Isabelle (Chloe Moretz), and an adventure into the early days of cinema.

For actor Ben Kingsley, portraying Melies was not easy. He had little to draw upon except for Melies’ films, in which the director often cast himself.

“I was able to watch him at the absolute peak of his career,” said Kingsley. “Fit like an athlete, fit like a dancer, amazing imagination, spectacular dexterity in his movements and disciplining everyone around him.”

Melies worked in a glass studio that allowed natural sunlight to illuminate his sets. He worked arduously as writer, director, editor, designer, actor and choreographer in movies that dealt with magic, fantasy, dragons, fairies and men on the moon. And when he was done for the day, Melies would head to the theater to perform magic tricks for packed houses.

“I think he must have got about four hours of sleep a night because having worked in his glass studio, he then went to the music hall in Paris to saw people in half and do all kinds of fun things like that,” said Kingsley.

Beyond watching Melies’ films and reading a brief biography, Kingsley turned to an obvious but unexpected source to shape his character.

“I realized that my role model for playing Georges Melies should be Martin Scorsese,” he said. “I observed him and his manner on set and his passion for newness, for invention, for reinvention, for making fresh and new everything he touches, which definitely Georges did.”

While “Hugo” is a celebration of early film, it also stands as a reminder of how far contemporary Hollywood - with its remakes, franchises and adaptations - has strayed from its roots in imagination and invention.

“I think it’s a eulogy [to film]. I hope it’s not a requiem,” Kingsley said . “I am of the belief that Marty, in his genius, has pushed cinema around a very nasty corner. To try and find a narrative film that does not insult your intelligence, that is life affirming, especially if it’s a tragedy, is rare.”

As Hugo’s abusive Uncle Claude, Ray Winstone found his third collaboration with Scorsese delightful. “It was like he was falling in love with making a film again,” Winstone said. “Watching him work with 3-D, it was like watching a kid with a new toy.”

“He can put tenderness on the screen in a remarkable way,” added Kingsley. “Come and dream with me, that’s what Marty’s saying.”