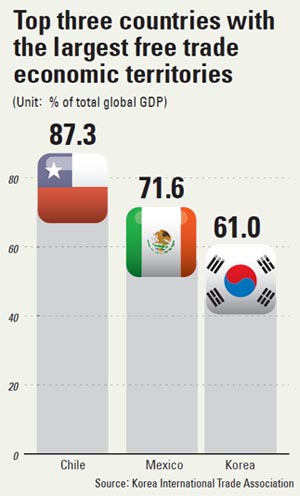 While Korea has enlarged its territory for free market access with the recent ratification of the Korea-United States free trade agreement, nearby countries like China and Japan that have remained relatively passive in expanding their “economic territories” are turning more aggressive.

The multilateral free trade accord is currently being promoted by the U.S. as well as other nations - Australia, Brunei, Chile, Malaysia, New Zealand, Peru, Singapore and Vietnam - and Japan also expressed earlier this month its intentions to officially join the discussion.

Following Japan, Canada and Mexico also said they are willing to participate, increasing the number of countries to 12.

The promotion of the TPP, which dates back to 2006, gained momentum at the recent Asia-Pacific Economic Cooperation summit when Canada, Japan and Mexico appealed to their interest.

“The Japanese government decided to arrange an official trade negotiator for external affairs who will be leading the TPP trade accord,” the NHK reported on Wednesday.

Along with Japan, China is also expected to accelerate its free trade policy promotions.

“The labor cost in China has been on the increase as of late, which has narrowed down the gap with Korea in terms of production cost to quality,” said Park Han-jin, an official from the Korea Trade-Investment Promotion Agency. “Concerns are growing among Chinese firms already.”

Recently, China’s Premier Wen Jiabao expressed that he wants his country to speed up work on the free trade accord with Korea and Japan when he met the leaders of each country during the East Asia Summit on Bali, Indonesia.

According to reports, the premier proposed that the governments, industries and experts of three countries should undergo joint studies with an aim to complete them by the end of this year and that formal negotiations of the pact should begin next year.

The two government’s resolution comes as Korea has been aggressive in signing free trade accords, which President Lee Myung-bak noted as a “must” to survive the economic downturn and to remain stable.

On Tuesday, Korea’s National Assembly ratified the country’s FTA with the U.S., making it the first and only nation to have signed a trade deal with both the world’s largest economy and the European Union.

Once the negotiation settles, Korea is expected to increase its economic territory even more.

In the case of Japan, it has signed deals with 13 countries including the Association of Southeast Asian Nations as well as Mexico and Chile. Japan is also considering an accord with the EU. China has signed accords with 10 countries including the Asean, Macau, Chile and Peru and is currently under negotiation with Switzerland, Norway and Iceland.

While China and Japan are seemingly in a rush to expand their economic territories - as of now both make up 17 percent of the world’s GDP - Korea is relatively composed.

“Korean automakers and auto parts manufacturers have gained more competitiveness in the U.S. market with the elimination of tariffs,” said an official from the trade ministry. “This is in contrast to Japanese firms.”

Based on the Korus FTA, the U.S. will eliminate its 2.5 percent tariff on automobiles in four years once the deal takes effect next year.

“Korea’s aggressive approach in inking free trade accords with large economies including the U.S. and the EU has allowed Asia’s fourth-largest economy to gain competitiveness in the global market,” said Cho Yong-joon, a researcher at Shinyoung Securities.

“Korean firms are more price competitive than Japanese firms overseas and the quality of products are incomparable to those of Chinese products.”