Cats are the subject of a new documentary that is likely to change how the animals are seen in a country that has traditionally regarded them with suspicion.

The film originated with Lee Yong-han, a professional poet who also describes himself as a traveler. Lee said he became interested in the animals after observing a stray cat family one night three years ago. He started photographing and writing about cats and would upload the content to his blog, which has since made him famous. He published some of the material from the blog in the book, “Hello and Thank You Stray Cats,” which has sold more than 35,000 copies since its publication in 2009 and became the inspiration for the film. After the publication of the book, Lee met up with Yoon Gi-hyung, who works as a television commercial director

Yoon originally conceived the project as a 20-minute short with photos of Lee, but said that after deciding to incorporate more material he spent about a year and a half filming stray cats around his place with his camcorder.

The film alternates between the two men’s creations, with interludes of animation and indie music in between. The structure is simple but the film is entertaining, informative and even touching.

As we see the two men’s interactions with the cats develop, we also gain insight into the animals’ behavior. Some of the more entertaining shots show the cats playing with plastic bags, while more moving scenes show them delivering and nursing their young or picking through chicken bones out of starvation (this cat was later adopted by Lee). Through it all, we also witness the cats’ struggle to survive and, when they lose this battle, the lonely deaths they die in the middle of the streets.

The film is not a serious documentary, but it does pose some interesting questions about how cats live while ultimately revealing something about their human counterparts. 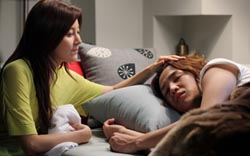 “You’re My Pet” starts with a bewildering discovery by a lonely woman named Ji-eun (Kim Ha-neul) of a box placed in front of her house big enough to contain a man - which it does.

The man in the box is In-ho (Jang Geun-suk) and upon discovering him, Ji-eun finds him irresistibly adorable as the spitting image of the pet dog she had when she was a child.

She jokes that she wants to claim In-ho as her pet and, to her surprise, he agrees.

Later, however, complications arise as the line between pet and master is crossed and the arrival of her ex-boyfriend from college confuses the relationship even further.

Things take another unexpected turn when Ji-eun discovers that In-ho is a spectacular dancer aspiring to be a musical theater choreographer or performer.

“You’re My Pet” is based on the Japanese manga “Kimi wa Pet” (“Tramps Like Us,” 2000-05) by Yayoi Ogawa. The movie is directed by Kim Byeong-kon, who was involved in producing previous romantic comedy “My Boyfriend is Type-B” (2005). 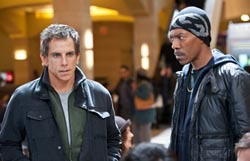 Ben Stiller teams up with Eddie Murphy to get back money that was stolen from a group of employees at a plush high-rise apartment building by Arthur Shaw, a Wall Street figure played by Alan Alda.

Stiller is the ringleader and hires a professional criminal (Murphy) to help them get their money back. The Macy’s Thanksgiving Day parade provides the backdrop for the movie as Murphy trains the previously straight and hard-working citizens.

Casey Affleck, Matthew Broderick and Tea Leoni feature as the newly formed criminal enterprise attempts to steal back the $20 million that is said to be stashed away inside Shaw’s apartment.

When Adam (Joseph Gordon-Levitt) sees a doctor after persistent back pains, he is hit with news that changes his life: A rare cancerous tumor has developed, and he has a 50 percent chance of surviving.

It’s difficult to write a comedy about a subject as serious as cancer, but Gordon-Levitt, Seth Rogen (Kyle) and director Jonathan Levine (“The Wackness”) draw laughter from the experiences of screenwriter Will Reiser, a cancer survivor.

Adam and Kyle, best friends and co-workers, take on the difficult path together. After shaving his head prior to chemotherapy sessions, Adam and Kyle decide to test the disease’s influence on single girls in bars.

The film reminds us that friends, family and love are the greatest healers.

Immortals is another big-budget, all-action, mega-blockbuster epic in the same vein as “Clash of the Titans,” “Spartacus” and “300.” So it should come as no surprise to learn that it was made by the producers of “300.” If a film’s worth making once.....

Titan god Hyperion (Mickey Rourke) declares war on all humanity and, in true epic-movie style, there is only one man who can lead humanity in the fight to preserve their very existence: Theseus (Henry Cavill). The mythical founder-king of Athens, son of Aethra and fathered by Aegeus and Poseidon, both of whom Aethra had slept with in one night (make your own joke up), Theseus inherited a combination of divine as well as mortal characteristics and was chosen by Zeus to lead his people against Hyperion.

Why Hyperion is sick to death of humans isn’t revealed in any of the previews, but I am sure he has a good reason.

Director Tarsem Singh has crafted a spectacular looking film that is replete with scenes of gratuitous violence for the blood thirsty.

So boxing robots and Wolverine. Could this possibly be the best film ever made?

Set in a “Blade Runner”-esque future where robot boxing is a top sport, “Real Steel” is centered around a struggling robot boxing promoter (Hugh Jackman) who thinks he has found a champion in a discarded sparring bot.

He discovers he has an 11-year-old son who wants to know his father, and there is a woman thrown in too, but this is all about the robots. Big, flashing, fighting robots.