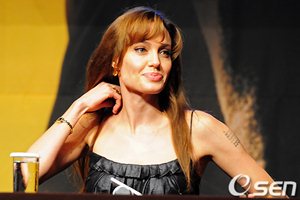 Oscar-winning Hollywood mega-star Angelina Jolie says she’s lucky to have survived her younger days when she dabbled in “dangerous” things, but says there’s a part of her that is still a “bad girl.”

“I went through heavier, darker times and I survived them. I didn’t die young,” the 36-year-old actress told CBS in an interview to be broadcast on Sunday. “So I am very lucky. There are other artists and people that didn’t survive certain things ... people can imagine that I did the most dangerous, and I did the worst, for many reasons, I shouldn’t be here,” she added.

Jolie, who is now the partner of fellow actor Brad Pitt, was once known for wearing a vial of her then-husband Billy Bob Thornton’s blood around her neck. And she has been estranged from her father, the actor Jon Voight, who once said publicly that he thought his daughter needed help. Jolie, who is now a mother of six children, said there were “too many times where you came close to too many dangerous things, too many chances taken too, too far.”

But speaking during an interview in Budapest where she filmed some of the scenes for her directorial debut “In the Land of Blood and Honey,” Jolie said that despite building a family with Pitt, she had still kept her edge.