Djokovic suffers ‘worst match of the year’ at ATP

Djokovic suffers ‘worst match of the year’ at ATP 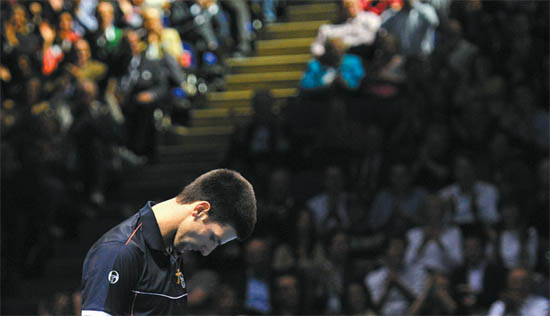 Novak Djokovic of Serbia reacts during his tennis match against David Ferrer of Spain at the ATP World Tour Finals at the O2 Arena in London, Wednesday. Djokovic lost 6-3, 6-1. [REUTERS/YONHAP]


LONDON - There have been many highlights this year for Novak Djokovic, but he described his woeful defeat by David Ferrer at the ATP World Tour Finals on Wednesday as his “worst match of the year.”

The world No. 1 was trounced 6-3 6-1 in little more than an hour by the tenacious Spaniard and could now miss out on the semifinals even if he does recover some form before taking on fellow Serb Janko Tipsarevic in his final Group A match.

“I mean, all the credit to my opponent, he played a great match. But, you know, I just wasn’t there,” the 24-year-old, who began the year with a 41-match winning rampage and won three of the season’s four grand slams, told reporters.

“It was the worst match I’ve played this season so far definitely. So many unforced errors. I’m not playing well. That’s a fact. Maybe it’s because of the length of the season. Maybe it’s just because I’m not feeling well. But those days are possible in sport and you have to accept the defeat.”

Djokovic, who had worries over a sore shoulder coming into the tournament, stayed with world No. 5 Ferrer until 3-3 in the opening set but his game then disintegrated into a pile of unforced errors - 33 to be exact.

“It’s hard to find something that I felt well tonight, really. Movement, just the feel for the ball, anticipation on the court, nothing. Just a terrible, terrible match.

“I mean, I’m embarrassed to look at the stats. I can’t imagine what the number is.”

Even if Djokovic bows out early in London and fails to reach the semifinals, a scenario he said could happen unless he improves “50 percent,” he said nothing could tarnish his year.

“I think nothing can ruin the season. I mean even if I didn’t play anything after U.S. Open, my season would still be incredible. So I don’t want to think in that way,” he said.

Ferrer’s win, his fifth in 11 meetings with Djokovic although only his second on hardcourts, meant the Spaniard is definitely through to the semifinals after two straight-sets wins, the other coming against Andy Murray.

While many of his rivals look in need of a rest, the 29-year-old looks as though he wants the season to run and run. “I think today was maybe my best match of the season,” Ferrer, the 2007 runner-up, told reporters.

He also explained his shrug of the shoulders celebration after winning match point.

“The gesture was for surprise. I beat the world number one in two sets.”