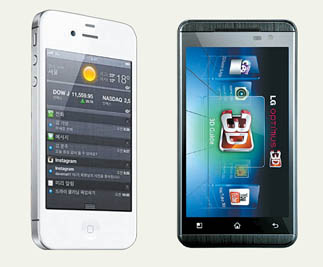 Three weeks after the iPhone 4S became available in the country, the prospects of it taking on Korea’s emerging army of fourth-generation (4G) smartphones are looking ever-slimmer.

So far demand for Apple’s latest upgrade to its iconic smartphone has been lukewarm at best. Sources in the mobile service industry claim that 300,000 preorders have been placed for one of the 3G handsets through SK Telecom and KT, but only around two-thirds of these have been sold.

Bad timing may prove a key stumbling block for the U.S. tech titan, which released the 4S at a time of systematic upheaval in the Korean telecom sector as key players attempt to shift over to LTE (Long Term Evolution), a 4G wireless network that offers faster data-processing speeds appreciated by gamers and users of multimedia content.

Domestic mobile phone makers such as Samsung Electronics and LG Electronics, as well as mobile service operators like SK Telecom and LG U+ are now working overtime to try and migrate customers over to the embryonic network.

But even this is not without problems. For one, it is still hampered by a lack of nationwide infrastructure that compels users to piggyback on regular 3G networks in areas that lack service.

SK Telecom and KT, the nation’s top two mobile carriers, began receiving preorders for the 4S from Nov. 4, but they have not yet officially disclosed sales figures.

“From what I know, of the 300,000 preorders placed, 200,000 have gone into service,” said a source at one of the nation’s telecom companies, adding that some retailers typically place orders to guarantee supply before determining demand.

This lackluster data suggests the new iPhone may be failing to impress Korean users as much as subscribers in other parts of the world.

It was met with a similarly muted response when first unveiled in the U.S. on Oct. 5 - blamed mostly on its lack of innovation - but the tide turned one day later when Apple co-founder Steve Jobs died of pancreatic cancer and fans flocked to buy what many saw as his parting gift. 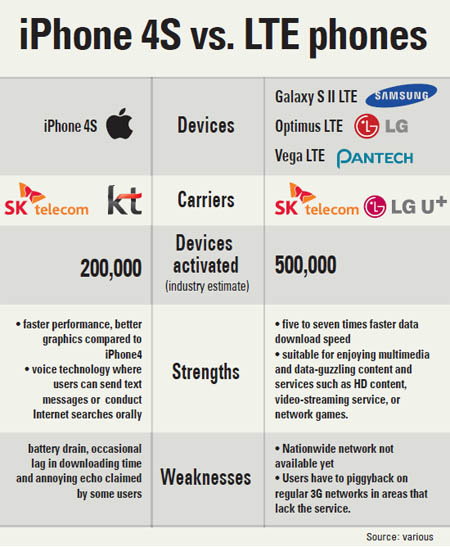 As one of the last products created during Jobs lifetime, the gadget sold over 4 million units during the first three days of its launch in seven countries.

This created high expectations in Korea as fans were made to wait almost one month to get their hands on the gizmo, whose main selling point appeared to be its voice-activated software Siri, a kind of digital personal assistant. However, the software is only available in English for now and users have complained that it does not recognize commands uttered in non-native tones, much to the frustration of Koreans who attempt to use it.

As the device was the first Apple smartphone to be launched simultaneously by rival networks SK Telecom and KT, industry insiders expected robust sales driven by the two competing hype machines. And with legions of KT subscribers nearing the end of their two-year payment plans for the iPhone 3G, KT assumed it would be a natural move for them to upgrade.

But hopes are already being dashed.

Such slow sales come in marked contrast to what is happening in the realm of LTE phones, which became available about one month before the 4S.

Due to stronger-than-expected consumer interest, SK Telecom, which originally planned to roll out a nationwide LTE service in 2013, decided to bring the date forward by eight months.

“The LTE service has caught on quickly,” Kwon Hyuk-sang, head of SK Telecom’s network division, said on Nov. 15. The company welcomes 15,000 new converts each day, or roughly one in three new subscribers, he said.

Insiders say the reported weaknesses of the 4S, such as the speed with which it drains the battery, slower response times in terms of downloading and an annoying echo, have left Korean users unimpressed.

The Guardian reported last month that some owners are being contacted by Apple after complaining about the lower-than-expected battery performance on the Web site.

There have been numerous complaints that their phones last just a few hours, even with minimal usage and power-draining features turned off.

And while the Galaxy S II, the 3G version of the Galaxy S II LTE, was voted among the “100 best electronics products of the year” by monthly technology magazine PC World, the 4S failed to make the list.

“All three major Korean telecom companies are rushing to adopt the LTE service,” said Kim Sang-yeop, a public relations manager at LG U+.

“As purchasers of an iPhone 4S will find themselves locked into two-year contracts, we expect to see sales of LTE phones pick up speed in the coming months [as consumers will not want to be stuck using a 3G service for so long].”

Meanwhile, on Nov. 14, LG Electronics, the world’s third-biggest handset maker after Nokia and Samsung, said that more than 150,000 units of its Optimus LTE smartphones have been activated in the country.

That is quite a feat given that it hit such numbers within little over one month of its release to become LG’s fastest-selling smartphone to date. And it couldn’t have happened at a more opportune time for LG, which has been verging on underdog status in the smartphone business as it has posted a disappointing series of results for its top models due in part to its late entry into the sector.

LG is keeping its fingers crossed that the Optimus LTE will help shore up its mobile phone business, which has posted losses for six quarters through September.

Meanwhile, its sister company LG U+ is also staking its future on LTE in hope that the tide will turn and this will emerge as the new standard.

For the last decade or so, SK Telecom has controlled about half of the Korean cell phone market and KT roughly 30 percent, while LG U+ ranked as a second-tier player with an 18 percent stake. Its customers were lured mainly by its cheaper rates.

“The rules of the game in the mobile communications market will change for good with LTE,” Lee Sang-chul, the company’s CEO, told reporters in July as LG U+ marked the commercial launch of its LTE service.

Although KT will soon be attempting to play catch-up, SK Telecom and LG U+ have already built an early lead in the LTE market.

The company said on Oct. 27 that its Q3 earnings spiked almost eight-fold on-year as subscribers signed up for it smartphone services, particularly LTE.