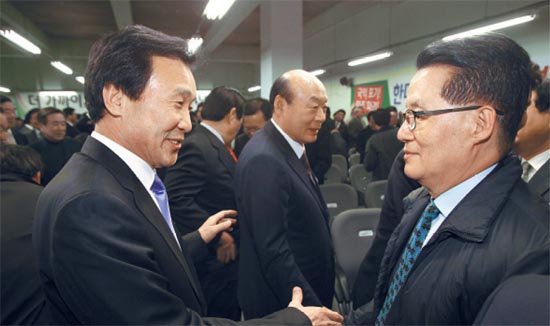 Representative Sohn Hak-kyu, left, chairman of the DP, and Representative Park Jie-won, after a six-and-a-half-hour meeting on Wednesday. By Kim Hyung-soo


The ambitious political experiment of Democratic Party Chairman Sohn Hak-kyu to merge liberal parties is being fiercely resisted by established members of the largest opposition party.

The Democratic Party held a central committee meeting on Wednesday to discuss a planned merger with a group of loyalists of the late former President Roh Moo-hyun, but the nearly seven-hour discussion ended without conclusion.

The DP said it will hold another committee meeting, but the plan to hold a joint leadership election with other liberals next month will probably be delayed.

Of the 454 central committee members, 247 attended the meeting Wednesday. DP Chairman Sohn Hak-kyu presented the proposal of completing the merger with a single national convention. The Democrats and the “Innovation and Integration” group formed by the Roh allies should hold a joint national convention on Dec. 17 to elect a new liberal leadership, the proposal said.

Sohn’s proposal, however, faced fierce protests by older members of the party led by former floor leader Park Jie-won. They demanded that the DP should hold its own leadership election and then try to merge with other liberal factions outside the party.

After Sohn finished his opening remarks, a party member shouted “Sohn Hak-kyu should be out!” Another party member jumped at Sohn, but was removed by party officials. After the rough start, the discussion was marred with insults and cruel language.

Another lawmaker, Moon Hak-jin, defended Sohn’s idea, saying it was imperative for the liberals to unite against the ruling Grand National Party in the next legislative and presidential elections.

Bellows and scuffles broke out during the discussion, and the supporters of Sohn’s merger plan attempted to hold a vote to endorse it by using their majority. But the naysayers used a filibuster to prevent them. The central committee meeting, which began at 4 p.m., ended at 10:30 p.m. without a vote.

In his closing remarks, Sohn expressed frustration that the merger plan could be derailed.

“You still elected me chairman although I have no ties to Jeolla,” he said. “I felt the sense of crisis when the DP failed to field a candidate in the Seoul mayoral by-election. No matter how hard it is, it is my sincere and loyal advice to the party that we must achieve the merger.”

Sohn was a former Grand National who served three lawmaker terms under the conservative party and was elected Gyeonggi governor under the GNP ticket. Sohn has never been shy about his presidential ambitions, and says a grand liberal merger is the only way to achieve victories in next year’s elections. He left the GNP to join the DP in March 2007 to protest the party’s presidential primary process but failed to become the liberal party’s presidential candidate. He went on to win the DP chairmanship in 2008 and was re-elected to the post once again on Oct. 3, 2010.

He also mentioned recent media reports about the possible launch of a new political party by liberal independent Ahn Cheol-soo. “What will happen in the liberal arena then?” Sohn asked. “It is true that I feel a sense of urgency. We won’t have a chance unless we complete the merger by the end of this year.”

The DP Secretary General Jung Jang-sun said a central committee meeting will be held on Saturday or Sunday.

The internal rift within the DP appeared to be deep. “Unless the plan is endorsed, we should follow the party constitution and regulations,” Park, the DP’s former floor leader, said in an interview with CBS radio yesterday morning. “We must hold the DP leadership election first before the merger.”

Park, a two-term lawmaker with strong ties to the Jeolla region, was the closest aide to the late former President Kim Dae-jung. He issued an ultimatum that the DP should hold its own primary if the merger plan is not completed by Sunday. Park is reportedly eyeing on the DP’s chairmanship.

Possible partners in Sohn’s liberal merger plan issued a statement expressing disappointment. The Innovation and Integration group, independent politicians, civic activists and labor representatives said that the party should accept the public’s demand for reform and the merger.

“The argument to hold the DP’s leadership election alone is an attempt to absorb other liberal forces without any reform effort,” they said.

The DP and other liberal groups including Seoul Mayor Park Won-soon and South Gyeongsang Governor Kim Du-kwan - who have no party affiliations - as well as the Federation of Korean Trade Unions have established a joint conference for the merger. They are to meet today to discuss the merger plan.

Sohn’s drive for a liberal merger is also losing momentum as the DP leadership has failed to satisfy both supporters and critics of the Korea-U.S. free trade agreement. While liberal moderates turned their backs on the DP leadership for opposed the ratification of the FTA, the progressives condemned the DP for having failed to stop the Grand Nationals from ratifying it.